Jumping is an action that moves a character from the ground into midair. It is performed by pressing Up on the control stick, or the X or Y buttons with the GameCube and classic controller, or the C button on the Wii Remote and Nunchuk. All characters can also jump a second time in midair, providing they are not attacking, air-dodging, helpless, in hitstun, or have used it already.

There is a short delay between the Jump button being pressed and the on-screen character actually jumping, during which the onscreen character will enter a crouching portion of their jumping animation. If the Control Stick or jump button is released during this time, then the character short hops. If the Control Stick is tilted backwards during this time, the character will jump backwards with a different animation than a regular jump. If the standard attack button is pressed during this time, then the character uses their up smash (but only if the jump was executed with the control stick). Because characters can jump while shielding (excluding Yoshi, who has a unique shield), this allows usage of Up smashes (and up special moves as well) without having to drop the shield. This also makes it difficult for a player using the Wii Remote-only control scheme to perform up tilts. By pressing down on the control stick at the top of your jump, you will do a fast fall.

The following below is a ranking of all playable characters in each Super Smash Bros. game based on how many frames it takes for them to transition from the ground to the air.

Below are lists ranking characters by how high they jump. Note that this list only measures their first jump; ergo, all additional jumps are irrelevant.

The following is a ranking of the characters in Super Smash Bros. based on how high they jump from the ground with #1 being the highest jump.

The following is a ranking of the characters in Super Smash Bros. Melee based on how high they jump from the ground, along with the jump force of each character.

When combined with gravity and falling speed (characters that fall faster cannot jump as high with the same jump force), the ranking of jump height from the ground is:

The following is a ranking of the characters in Super Smash Bros. Brawl based on how high they jump from the ground, along with the jump force of each character.

When combined with gravity and falling speed (characters that fall faster cannot jump as high with the same jump force), the ranking of jump height from the ground is:

A short hop is a jump with a low height than normal. It is achieved by pressing the jump button for a split-second, when the character is in their jump-squat animation. Using a short hop allows some aerial attacks to be performed closer to the ground, making it useful for characters with a Meteor Smash move. The time needed to short hop depends on the jumping speed of the character, so while fast characters such as Fox need to short hops in 1-2 frames, slow characters like Bowser need 7 frames, allowing more lenient timing for executing. In the Subspace Emissary short hops are more difficult to perform due to the time needed for inputting a short hop is reduced to 2 frames for all characters.

A Footstool Jump, more commonly a Footstool, is a technique introduced in Super Smash Bros. Brawl. It is executed by pressing the jump button right when they are above another character. When used on a grounded opponent, they will enter an animation of the player bouncing off their head (in Super Smash Bros for Nintendo 3DS and Wii U, star effects are added as if the affected character was stunned). When used on an aerial opponent, the opponent will tumble downward. Executing a Footstool Jump does not inflict damage or produce knockback. While being classified as a Meteor Smash, it is not a true meteor smash as no knockback is produced and meteor-cancelling is not possible.

Footstool Jumping allows the player to gain more height while jumping, edge-guard opponents via gimping, disrupt attempts to gain items (particularly the Smash Ball), or ground them so other players can attack them. It can also be used start meteor smashes, such as Falco's and Marth's down aerial. 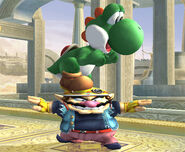 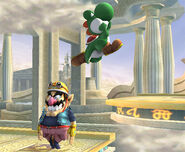 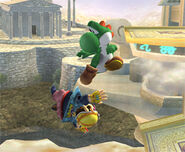