Judge is Mr. Game & Watch's Side Special Move. By using it, Mr. Game & Watch will attack with his hammer and hold up a card with a number on it. Each number has different effects. 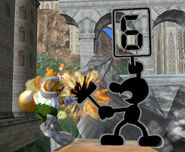 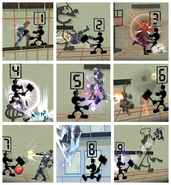 Mr. Game & Watch demonstrates all of his judge attacks in Brawl.
Add a photo to this gallery

The Extreme Judge quite literally has some extreme advantages and disadvantages. Both the numbers 1 and 9 will appear more often since they are the only possible numbers to get when using the move. The 1 deals less recoil damage, but since it is more likely to show up, Mr. Game and Watch can easily rack up a lot of damage on himself if the move is spammed. On the other hand, 9 is also more likely to show up, but is weaker, dealing less damage and slightly less knockback, making it less reliable for securing KOs. Since there are only two possible numbers Mr. Game and Watch can get with this move, it is easier for the player to predict what number will appear next, however, it is also easier for the opponent to predict this, allowing them to outmaneuver and stay away from Game and Watch if they know he has a 9 on board.

Chain Judge is one of Mr. Game & Watch's Side Special Moves that can be used via customizations. Mr. Game & Watch attacks with his hammer, if he hits an enemy, he will hit the number of times it says on the board with the final hit being a different amount of damage and higher knockback.

Chain Judge is excellent for racking up a good amount of damage on an opponent, especially if a higher number is displayed. This can make it a good combo finisher though it takes luck and chance in order to get a number that will work well as the combo finisher. The special effects that the different numbers had are no longer present; 9 is also weaker in KO power. The move still has some good launch power behind it though.

Judge was a Game & Watch game that could be played with two players. Two Game & Watch characters had signboards and hammers. When a round starts, each player's sign would display a random number from 1 to 9. The point of the game was for the player with the higher number to hit his opponent on the head with their hammer, while the player with the lower number tried to dodge said attack. If the numbers were equal, the player can either hit or dodge. This was translated in the Super Smash Bros. series, in which the higher the number, the stronger the attack.

Retrieved from "https://supersmashbros.fandom.com/wiki/Judge?oldid=581199"
Community content is available under CC-BY-SA unless otherwise noted.