This article is about Joker’s appearance in Super Smash Bros. Ultimate. For other uses, see Joker.

Jun Fukuyama
Joker is a downloadable newcomer in Super Smash Bros. Ultimate, representing Atlus' Persona series. He is the first DLC fighter of the Fighters Pass, and is classified as fighter #71. His inclusion was revealed at the Game Awards on December 6th, 2018, the day before Ultimate's release, and was released on April 17, 2019.

Joker is a combo-reliant character in a similar vein to Sheik, excelling in stringing together moves off aerials and grabs for a mix-up playstyle, though unlike similar characters his combo game can be supplemented by Arsene to increase his damage output and effectively finish off combos into KOs.

Joker possesses high falling speed, average weight, and fast ground speed, which results in good mobility on the ground and air. Unlike most humanoid characters, Joker has a rather slim frame, which gives him a rather difficult hitbox for opponents to connect to and allows him to avoid most attacks.

Joker's strength lies in his powerful combo game due to the low startup and knockback of his moves. His Down Tilt, the first hit of his Forward Air, Neutral Air, and Down Air serve as good combo starters, while his Up Aerial, Back Aerial, Forward Tilt, and Smash attacks serve as good finishers. Joker's throws also support his combo game, with Down Throw and Up Throw being most notable. The fast startup of Joker's moves also enables him to punish overextensions and whiffed moves exceptionally at close range, and enables him to edgeguard opponents well.

Joker's Special Moves offer a wide number of options to make his approach tricky. Despite its appearance, Gun is a disjointed hitbox that can be used to set up into various combos with its variations, most notably its aerial downward version, though it can also be used for evasion and recovery due to its ability to initiate a roll or jump while firing. Eiha is a more conventional projectile which can intercept others, and when connected, can deal damage over time to the opponent. Grappling Hook gives Joker an effective recovery when off-stage due to its range and ability to snap on ledges, and when used on the ground can catch opponents and draw them closer for setups. Rebel's Guard is Joker's most defensive option, as it allows him to block most attacks with their damage output halved and knockback negated while simultaneously filling up Rebellion Gauge.

Joker's most powerful asset however is his unique Rebellion Gauge; by charging it with Rebel's Guard or by taking damage, Joker can amplify the knockback and damage output of his combo game with Arsene's own power to rival that of Ganondorf's, allowing him to finish combos consistently and deal damage quickly in a short amount of time. Arsene also amplifies his Special moves to a powerful extent; Gun Special inflicts more damage and knockback, Eiagon deals knockback and its effect lasts longer, Wings of Rebellion travels significantly far and cannot be interrupted on startup, and Tetrakarn and Makarankarn grant Joker vast defensive options due to its long duration.

Joker's main weaknesses lie in the short reach of his attacks and lack of consistent kill options outside of edgeguarding when Arsene is not active. These weaknesses makes approaching characters with disjointed reach such as Lucina or small characters such as Pikachu difficult, as Joker's approach can be negated well enough without too much commitment. In addition, Arsene's strengths only last for a short period of time, necessitating Joker to make the most out of them; however, if Joker takes damage, Arsene's duration will be reduced, which can accelerate his removal. Joker's normal recovery, while exceptional vertically, is rather lacking horizontally, which makes him easy to pressure toward the side blast zones, and Wings of Rebellion, while being a longer recovery, is also a more vulnerable one due to Joker having no hitbox and traveling in a linear path.

In short, Joker requires creatively pressuring with moves and grabs to initiate combos, as well as bait out aggression with Rebel's Guard to charge Arsene quickly. In addition, though Arsene provides massive strength, they must be used strategically in the short time they are available in order to consistently deal high damage and secure stocks.

Rebellion Gauge is Joker's unique gauge that appears alongside his damage meter, which allows him to call upon his Persona, Arsene. It is filled over time or when Joker takes damage, though it fills up more if Rebel's Guard is used, with the amount given greater when Joker is behind a stock. If Joker is KO'd, he retains 20% of the gauge.

Upon filling up Rebellion Gauge, Joker will shout "Arsene!" or "Persona!", summoning the being while taking off his mask (or his glasses if in his Student outfit), with the same object disappearing from his damage meter while the gauge turns blue. If Joker is not in hitstun or moving when Arsene is summoned, he gains invincibility during its startup and briefly stops his initial momentum, with a cut-in of Joker's face appearing if the match is a 1v1.

While Arsene is present, the Persona will attack in tandem with Joker, increasing its damage output and knockback, visually indicated by a blue slash. Joker's Special Moves also upgrade to Gun Special, Eigaon, Wings of Rebellion, and Tetrakarn/Makarakarn. The Rebellion Gauge drains slowly over a span of thirty seconds when Arsene is active, with Arsene's duration being shortened if Joker gets damaged. If completely emptied, Joker will shout, "Return!" or "Enough," and put on his mask or glasses again while dismissing Arsene, with Joker being given invincibility and halting his momentum if not in hitstun or moving. Arsene will disappear briefly when Joker is grabbed or stunned, and if Joker is KO'd while Arsene is present, the Persona will disappear and the Rebellion Gauge will be reset to its charging state.

Joker's Victory Poses reference the victory screen in Persona 5, with the transition to the victory screen showcasing a puff of cartoony smoke before showing Joker moving continuously left. When transitioning to the results screen, Joker will say "Begone.", "Nice.", or "Hah!"

Rather than the announcer calling out "Joker wins!", one of the Phantom Thieves may follow up Joker's win with a quote.

If Arsene is activated, he will attack alongside Joker for all his moves barring throws, get-up attack, and ledge attack.

Joker had a mixed, albeit positive reception on his release. Many players praised his movement with his horizontal and vertical speed alongside his great combo ability, and noted how all these traits were supplemented when Arsène was activated, granting him much greater damage and kill potential. His downward-angled Gun and Eiha/Eigaon were also viewed as fantastic tools that allowed him to easily escape disadvantageous situations and rack up percentage, respectively. However, many also noted how Joker had difficulty killing when Arsène was not active, given that his kill setups are unsafe on shield and quite difficult to consistently land, as well as many of his moves outright having low base knockback or knockback growth, which resulted in players labeling his kill potential as "inconsistent". In addition, players also remarked base Joker's relatively low damage output per move, seemingly exploitable recoveries with and without Arsène, and lack of out of shield options. Thus, initial opinions on him were divided: players such as Tweek and CaptainZack labeled him as a potential top tier character while others such as Leffen and VoiD regarded him as a mid-tier and low-high tier character, respectively.

However, opinions regarding Joker's viability had improved substantially since MkLeo, the best Ultimate player in the world, started using the character. MkLeo utilized Joker's quick movement, remarkable frame data, combos such as the drag-down combos, and the powerful advantage state of Arsène to place in the top 2 at every tournament he has attended since MomoCon 2019. Thanks to MkLeo's success, several other top players have picked up Joker as a secondary or co-main. Most notably, Zackray had used Joker as a co-main to win several Japanese nationals and a supermajor and is considered to be the best player in Japan. Due to their success, many top players have named Joker as the single best character in the game. On the other hand, some argue that Joker's success largely relies on MkLeo's skill as a player, which allows him to push the character extremely far, as no players outside of Zackray have even come close to his achievements. Regardless, Joker is commonly considered a top tier and one of the best characters in the game despite nerfs in subsequent patches, with Zackray getting 2nd at Kagaribi 4, the first supermajor after COVID-19, and using Joker to defeat Yamanaction, Raito, HERO, Tea and ProtoBanham's Lucina.

However, in online tournaments, MKLeo has opted not to play Joker due to the nature of Smash Ultimate's netcode necessitating a different playstyle, rather than doing so with Joker, he has decided to choose different characters, such as Byleth, Cloud and Pyra/Mythra. This has led to a perception that Joker is a significantly weaker character online, due to his more technical combos and reactionary playstyle becoming too hard to perform or unrewarding. However, Joker still possesses traits that are effective online, such as quick movements, a difficult to react to projectile, fast smash attacks and powerful aerials when Arsene is active. Most recently, the success of players such as Sharp in online tournaments has challenged the perception that Joker is not well suited for the online metagame.

Joker's Classic Mode is a reference to the Persona 5 mechanic of battling Shadows before recruiting them as Personas, with the opponent of the last battle, who previously appeared in a dark palette, to assist Joker in the subsequent battle in a light palette swap.

A tease of Joker's model from the Nintendo Direct on February 13, 2019

A view of Joker's in-game model from behind 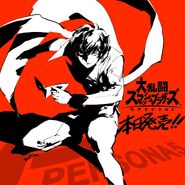 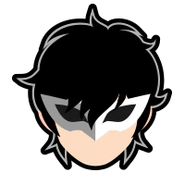 Joker along with Bayonetta and Kirby on the new stage Mementos.

Joker along with Toon Link in the new stage Mementos.

Joker along with Daisy in the new stage Mementos.

Joker along with Pit in the Mementos stage.

Joker with Bayonetta Rosalina and Kirby in the Mementos stage.

Joker and Arsene along with Kirby in the Mementos stage.

Joker along with Mario and Kirby in the Mementos stage.

Joker along with Snake and Kirby in the Mementos stage.

Joker along with Daisy and Kirby in the Mementos stage.

Joker along with Bayonetta Mario and Sonic in the Windy Hill Zone stage.

Joker along with Lucas and Robin in the Find Mii stage.

Joker use his All-Out Attack Final Smash on Bowser.

Joker and Arsene along with Mario in the Mementos stage.

Joker along with Mario and Sonic in the Mementos stage.

Joker along with Toon Link and Kirby in the Mementos stage.

Joker with a Daybreak item.

Joker with a gun