Very Rare
Jirachi (ジラーチ, Jirāchi) is a legendary Pokémon that first appeared in the Nintendo games Pokémon Ruby and Sapphire.

Jirachi appears as a Poké Ball Pokémon in Super Smash Bros. Brawl. It will drop numerous stickers or on rare occasions, trophies upon release, before flying away.

Jirachi, Mew, and Celebi will appear 1/493 of the time individually.

A Wish Pokémon. It's said to awaken for seven days every thousand years, with the ability to grant any wish asked of it. It is truly a Pokémon of which dreams are made. In combat it uses its wish power to attack. Its attack Doom Desire, which causes light to rain down from the heavens to do tremendous damage, is especially powerful.

"You've encountered JIRACHI for the first time! Make a wish!" 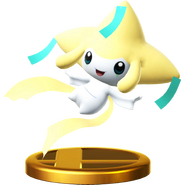 Jirachi's trophy in Super Smash Bros. for Wii U