This article is about Jigglypuff's appearance in Super Smash Bros. for Nintendo 3DS and Wii U. For other uses, see Jigglypuff.

Jigglypuff returns as a playable character in Super Smash Bros. for Nintendo 3DS and Wii U. It is one of the "Original 12" characters who have appeared in every Smash Bros. installment. It is unlockable in the 3DS version, but a starter in the Wii U version marking its first appearance as a starter in the series.

Jigglypuff currently ranks 55th on the tier list, being placed at the very bottom of the list. Despite most of its attacks being buffed from Brawl to deal higher damage, especially Rest, and it possessing a strong air game, they nowhere near resemble their strength in Melee. Jigglypuff still suffers from a very weak ground game, and has high lag on many moves coupled with low range. It is also the lightest character in the game, making it incredibly easy to kill, though, on the flip-side, harder to combo.

After completing either option, you must fight and defeat Jigglypuff on Unova Pokémon League.

Jigglypuff received many buffs that brings it a bit closer to its incarnation in Melee. The speed and power of its attacks has been increased, however a few moves were nerfed. Its range was also increased in some attacks.

◾Up Tilt – Stands on one foot and kicks upwards with the other foot.

◾Down Tilt – Kicks low across the ground.

◾Side Tilt – Spins on one foot and kicks with the other.

◾Down Smash Attack – Puffs up, kicking to each side.

◾Ledge Attack – Flips back on the stage and kicks forward.

◾Get-up Attack – Gets up and spins around with its foot extended.

◾Up Air Attack – Swipes above with one hand.

◾Back Air Attack – Kicks back with both feet.

◾Pummel – Pounds the enemy with an open hand.

◾Forward Throw – Inflates to push the opponent away.

◾Backwards Throw – Leaps backwards and slams the opponent on the ground.

◾Down Throw – Places the opponent underneath and rocks back and forth on them.

◾Up Throw – Twirls around with the opponent on one of its arms and throws them upwards.

Up Taunt: Spins while saying 'Jigglypuff' and then puffs up like a balloon.

Side Taunt: Spins around quickly and then raises a hand in the air while striking a pose.

Down Taunt: Puffs up and then deflates, floating slowly to the ground in a flat form before landing and reinflating.

This Normal/Fairy-type Pokemon is best known for its soothing singing that can put foes to sleep. In Smash Bros., it fights best in the air and can even jump six times in a row. The downside, though, is that Jigglypuff's so light, most opponents could launch it in their sleep! 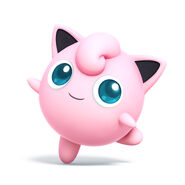 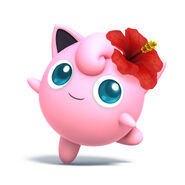 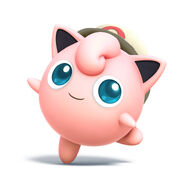 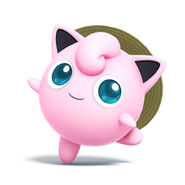 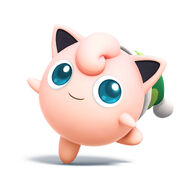 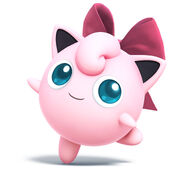 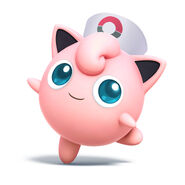 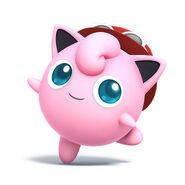 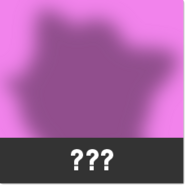 Jigglypuff as it appears in the Official Website. Note that its image is blurry, since it is a secret character. 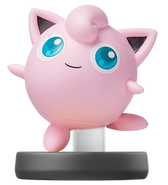 Jigglypuff's Stock Icon.
Add a photo to this gallery

Retrieved from "https://supersmashbros.fandom.com/wiki/Jigglypuff_(Super_Smash_Bros._for_Nintendo_3DS_and_Wii_U)?oldid=587481"
Community content is available under CC-BY-SA unless otherwise noted.