Mika Kanai
Jigglypuff, (プリン, Purin), is an unlockable character in Super Smash Bros. Melee from the Pokémon series, making a return from original Super Smash Bros. game. Jigglypuff retains most of its moves from Smash 64, though with some modifications.

Jigglypuff is in the S tier at 3rd place on the Melee tier list, a significant improvement from its 6th position on the previous game's tier list, and a position it has only attained in this game. Jigglypuff's jump on the tier list is due to its incredible recovery, an extremely dangerous edge-guarding technique in the wall-of-pain, a powerful KO move that can easily be comboed into, and an overall great aerial game and developed metagame. Its floatiness also makes it the only character in the top tier who cannot be easily comboed or chaingrabbed, which is also aided by its small size, which allows Jigglypuff to avoid most KO setups that most other characters would fall vulnerable to. Regardless, Jigglypuff still has problems. It is light and floaty, making it easier to KO with stray moves or certain low percentage setups than other characters. Jigglypuff's options on the ground are also limited, because of its poor range and a lack of a projectile. It also has a slow walking speed and dashing speed. Compounded with a poor dash dance, Jigglypuff's neutral game, which is largely committal, is not as good as that of other top-tiered characters; instead, it relies on its lethal punishes, edge-guards, and aerial mobility to succeed. Recent developments in the Melee metagame have also worsened Jigglypuff's matchups against other top-tier characters, such as Fox, Marth, and Falco. Regardless, Jigglypuff still has an excellent amount of favorable matchups, with its only true disadvantageous matchup being Fox, and two of its matchups are nearly unloseable (against Ness and Pichu).

Jigglypuff is fought on Pokémon Stadium, with the titular track playing. 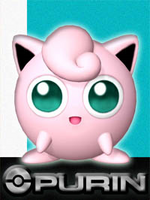 Jigglypuff is, in general, a character of extremes. It has the slowest dash speed (along with Zelda), the highest air speed, is the second least weighted character in terms of weight class (along with Mr. Game & Watch), and it bears the lowest falling speed. Jigglypuff will spend most of its time in the air, as it has 5 midair jumps, good aerial mobility due to the aforementioned low falling speed and high air speed, and a solid set of aerials. Its aerial maneuverability allows itself to weave in and out to attack. It also allows Jigglypuff to have very long recovery and great edgeguarding tactics.

Jigglypuff's Neutral Special Move, Rollout, is very powerful and covers a great distance. However, it requires charging, can easily lead to a Self-destruct if players are not careful, and puts Jigglypuff into a helpless state if used in the air. Its Side Special Move, Pound, has relatively poor range and a bit of starting lag, but it can make Jigglypuff's recovery nearly infinite (see Rising Pound). Its Up Special Move, Sing, puts enemies to sleep. This is next to useless when the opponent is at low damage, because the opponent will wake up and attack Jigglypuff before it finishes singing. At higher damages, however, the opponent stays asleep for longer. This means Jigglypuff can finish the opponent off with a Smash Attack, or Rest. However, it will not help Jigglypuff recover, unlike most other Up Specials. Rest has very low range and leaves Jigglypuff extremely vulnerable if it misses, but if the attack lands, it KOs an opponent at almost any percent. Rest comes out in one frame, making it tied with Reflector for the fastest move in the game, and provides invincibility frames until Jigglypuff closes its eyes.

Jigglypuff is immune to most chain grabs and combos because it is very light, very floaty, is small, and has excellent DI (among the best in the game). Jigglypuff can combo itself due low knockback attacks. Jigglypuff does lack a projectile, but its very low crouch allows it to dodge many projectiles from opponents. If Jigglypuff's shield breaks on a stage with no ceiling, Jigglypuff will be Star KOd, but Jigglypuff's shield is large in relation to its body. Another problem is that Jigglypuff has a poor wavedash due to its high traction, but this isn't too much of an issue considering that Jigglypuff spends most of its time in the air anyway.

Jigglypuff's biggest weaknesses are its poor range and extremely low weight/considerable floatiness. The lack of range heavily limits Jiggly's combat options, and the low weight/floaty nature cause Jigglypuff to be very easy to KO from any side of the screen. Good Jigglypuff players need to continuously combo the opponent as to prevent enemy retaliation, as a single powerful hit can be devastating to Jigglypuff. Also notable is Jigglypuff's virtual lack of a meteor smash- its Down Aerial has the ability to meteor smash opponents, but using it to try to perform such is difficult to the point of impracticality.

When transitioning from Smash 64 to Melee, Jigglypuff received multiple buffs, primarily in regards to its power, speed, range, combo ability, and recovery. Due to its high results in tournament play, Jigglypuff is widely considered one of the most buffed characters in the game, alongside Samus.

In addition to the normal trophy about Jigglypuff as a character, there are two trophies about it as a fighter, unlocked by completing the Adventure and All-Star modes respectively with Jigglypuff on any difficulty.

Jigglypuff:
This balloon Pokémon invites its opponents in close with its big, round eyes and then puts them to sleep with a soothing lullaby. It puffs itself up when angry, and while it may look adorable, it's not to be trifled with: it knows several powerful techniques. Jigglypuff evolves into Wigglytuff after exposure to a Moon Stone.

Jigglypuff (Smash Red):
Jigglypuff's normal attacks are weak, and because of its light weight it's easily sent flying. However, with its incredible midair agility, it seems to dance when airborne. Rollout is a powerful speed attack, but be careful not to fly off the edge. Pound does serious damage, and it can also help as a recovery move.

Jigglypuff (Smash Blue):
Jigglypuff can put its enemies to sleep if they are in range of its Sing attack, although the attack does not work on airborne foes. Rest puts Jigglypuff into a deep sleep, but at the instant it drops off, an intense energy force radiates out of the exact center of its body. If this force comes in contact with an enemy, look out! Rest is Jigglypuff's wild card.