Official artwork of Jigglypuff from Pokémon FireRed and LeafGreen Versions.

Mika Kanai
Jigglypuff (プリン, Purin?) (Rondoudou) is a fictional creature in the Pokémon media franchise, originally a Normal-type Pokémon until Generation VI saw fit to give Jigglypuff and the rest of the members of its evolution line a Fairy sub-typing.

Jigglypuff first appears as one of the 151 species of Pokémon in the Pokémon Red and Blue Versions, and appears in all versions following after it. Despite not being a lead character in the Pokémon franchise, Jigglypuff was selected to appear in the Super Smash Bros. series due to its similarities to Kirby, which allowed the staff to reuse the model and many animations as a base for Jigglypuff.

Jigglypuff is similar to Kirby in appearance, but with larger eyes, thinner limbs, and large, triangular, cat-like ears, a lighter shade of pink, as well as a curled tuft of hair on its head. This somewhat feminine appearance has led to many players to refer to Jigglypuff as "she". Within the Pokémon world, there are both male and female Jigglypuff, and females are more common than males, but the Smash character is always referred to as "it" within the game.

The Pokédex provides additional biological info about the Jigglypuff species: After it mesmerizes its foe with its large, round eyes, it sings its lullaby until the foe sleeps, and does not stop to breathe until the foe is fully asleep; it can perform longer with its single breath if it inflates its body with air beforehand.

Jigglypuff's signature attack is Sing. They have the ability to put their foes to sleep extremely quickly with Sing. Jigglypuff can fluctuate the wavelengths of their voices to suit its opponent as not every enemy falls asleep the same way as others. Once their foes are asleep, they will typically vandalize them before they wake up by drawing on their faces and attacking them with other attacks. If their Sing attack doesn't put an opponent to sleep, they will enlarge their eyes which bring on a "heavy" feeling onto their opponent, putting them to sleep with just their large eyes. Jigglypuff can also use Rest, a Psychic-type attack that will put Jigglypuff to sleep but completely heals them. This does leave them open to attack and will use Rest only when necessary. Unlike in the Super Smash Bros. series where Rest can easily KO an opponent, Rest does not do any damage to a foe in the Pokémon RPGs.

Jigglypuff are called the Balloon Pokemon for a reason as they can inflate themselves with air (similar to Kirby) and fly around. They can easily inhale and exhale air as they please to move around in the air. While Jigglypuff can use Puff Up in Super Smash Bros. as its Final Smash, there is no attack in the main Pokémon games like that where Jigglypuff grows to that size, however, it can be assumed that they can get to large sizes akin to that in Smash Bros. Jigglypuff can also enlarge themselves with air to look more imposing on enemies though they usually end up looking cuter. Jigglypuff are however, weak in defensive stats and don't have the best offensive levels either. Their Sing techniques won't work on Pokémon that have the abilities Insomnia or Vital Spirit as these abilities prevent a Pokémon from falling asleep in battle. Jigglypuff live in urban areas and can be found in cities though they can be found in forests or anywhere with foliage basically. Jigglypuff are weak to Poison-type and Steel-type attacks. Jigglypuff evolves into Wigglytuff when exposed to a Moon Stone. Igglybuff evolves into Jigglypuff when its friendship levels with its trainer is high.

The Balloon PKMN with the big, round eyes. It sings a soothing melody, sending those that hear it to sleep. When mad, it puffs itself up. As a Balloon PKMN, its body is light, weak, and easy to knock away.

Jigglypuff returns in Super Smash Bros. Melee as one of the eleven secret characters. It is unlockable after clearing Classic or Adventure with any character, except Mario unless Dr. Mario is unlocked already.

While originally 8th on the tier list, Jigglypuff now ranks at 5th. Thanks to an update, and like a few other characters, it has a new Neutral B move, Rollout, which replaces its previous standard special move, Pound, which has become its Forward B move.

Jigglypuff has three trophies in its name, just like all the other playable characters; the original trophy, the Smash Red trophy, and the Smash Blue trophy.

This Balloon Pokémon invites its opponents in close with its big, round eyes and then puts them to sleep with a soothing lullaby. It puffs itself up when angry, and while it may look adorable, it's not to be trifled with: it knows several powerful techniques. Jigglypuff evolves into Wigglytuff after exposure to a Moon Stone.

Jigglypuff [Smash]
Jigglypuff's normal attacks are weak, and because of its light weight it's easily sent flying. However, with its incredible midair agility, it seems to dance when airborne. Rollout is a powerful speed attack, but be careful not to fly off the edge. Pound does serious damage, and it can also help as a recovery move.

Jigglypuff [Smash]
Jigglypuff can put its enemies to sleep if they are in range of its Sing attack, although the attack does not work on airborne foes. Rest puts Jigglypuff into a deep sleep, but at the instant it drops off, an intense energy force radiates out of the exact center of its body. If this force comes in contact with an enemy, look out! Rest is Jigglypuff's wild card. 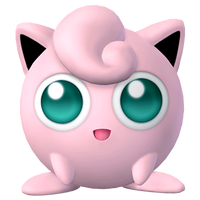 Jigglypuff appears once again in Brawl. Jigglypuff appears the same as before, but is more difficult to unlock previous installations of the series, considering it was the 33rd character introduced on the Dojo and the last returning character to be unlocked.

Jigglypuff's Final Smash is Puff Up. It inflates and gets larger and pushes any character off the stage, and Jigglypuff is invulnerable during this form. Jigglypuff ranks 35 out of 38 on the current tier list, having been nerfed in much the same way that Kirby was in Melee.

Jigglypuff
A Balloon Pokémon. It invites opponents in close with its big, round eyes, then puts them to sleep with a sleepy song. The secret to the song's unfailing efficacy is Jigglypuff's ability to sing on the wavelength that will make its opponent the sleepiest. It also uses Attract to infatuate opponents who touch it. It uses a Moon Stone to evolve into Wigglytuff. 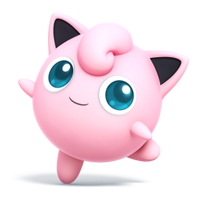 Jigglypuff
This Normal/Fairy-type Pokémon is best known for its soothing singing, which can put foes to sleep. In Smash Bros., it fights best in the air and can even jump six times in a row. The downside, though, is that Jigglypuff's so light, most opponents could launch it in their sleep!

Jigglypuff (Alt.)
Jigglypuff's down special Rest sends this Pokémon into a deep sleep that damages and launches any foe it's touching upon napping. They'll even take damage after being hit! It's a pretty challenging move to land, though, and it leaves Jigglypuff wide open to revenge. Be careful when you use it.