King Dedede wields his hammer up, charges it, and when released he swings it like a baseball bat, slightly out of control because of the hammer's rocket boosters. Dedede can even walk around and jump with it charged up, but he can't save the charge with the shield button. If it is charged up too much, it will cause 1% of damage to King Dedede every second until the player releases the attack or if his damage reaches 150% (100% in SSBWU/3DS); only then he will no longer be damaged by the minor damage. Fully charged, the hammer does massive damage and knockback. Although his Forward Smash has more knockback and range, this attack allows him to move, making it easier to edgeguard with it, or hit a falling enemy. It can also reflect projectiles. In addition, it has much less windup lag, although, in return, like Quick Draw, it is easily telegraphed.

A little known fact is that an almost fully charged Jet Hammer (does 30% damage) has greater knockback than a fully charged one (which does 31%). 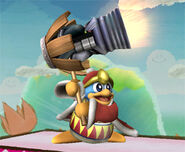 The mechanics of King Dedede's hammer can be seen when using or charging this special move. 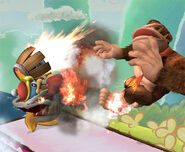 When fully charged, it packs a punch.

In Super Smash Bros. for Nintendo 3DS and Wii U, with the introduction of Custom Moves, King Dedede has 2 variations of Jet Hammer.

The Armored Jet Hammer is similar to Donkey Kong's Stubborn Headbutt, having Super Armor while King Dedede charges the attack tat makes it difficult for opponents to interrupt with their own attacks. Though a powerful kill move, the Armored Jet Hammer has no set-ups, relying entirely on punishing an opponent's options. The attack deals less damage than the default variation and King Dedede takes more recoil damage when the charge is held for too long. Like the default variation, the attack has high ending lag if it misses.

Dash Jet Hammer pushes Dedede backward while charging, and sends him dashing forward when he attacks.

The Dash Jet Hammer is similar to the Dashing Assault in that it takes a stationary attack and makes it one that surges forwards as the attack is executed. While charging King Dedede is pushed backwards slowly, but walking forwards while charging neutralizes this effect, making it practically unnoticeable. The Dash Jet hammer is a kill move but it has little to no set-ups; it combos out f jab at low percentages, but nothing else. Since it has greater range, covering a greater distance, it can be used as a surprise attack of sorts; the move also travels farther the more it is charged up. The move can also be used for horizontal recovery, which is quite useful considering that King Dedede doesn't possess a horizontal recovery move.

Kirby is seen performing a similar move with the hammer in Kirby Super Star, Kirby & the Amazing Mirror, and Kirby: Squeak Squad. The jet engine inside the hammer is a new feature shown in Super Smash Bros Brawl. In Kirby Super Star Ultra's the "Revenge of the King" sub-game, King Dedede makes an appearance with a new mechanical mallet for his revenge match with Kirby. However, its appearance is much more exaggerated. It has the ability to shoot missiles and spew fire, as well as being electrified and having a jet powered spin attack. King Dedede appears to have really thought the match through, as he has placed an electric cage over the ring so Kirby can't get out of the mechanical mallet's range. Since Kirby Super Star Ultra was released 6 months after Super Smash Bros. Brawl, the mechanical hammer was exclusive to Brawl, but it is possible that this was inspired by it.

There is a glitch that increases the effectiveness of this move by allowing King Dedede to skid across the stage at incredible speeds while retaining a full charge. This is done by charging the hammer until Dedede begins damaging himself, and then tilting the control stick in a direction just barely enough to allow Dedede to move. If done properly, Dedede will continuously take only the first step in his walking animation and move across the ground at an incredible speed.

Retrieved from "https://supersmashbros.fandom.com/wiki/Jet_Hammer?oldid=576836"
Community content is available under CC-BY-SA unless otherwise noted.