Official artwork of Ivysaur from Pokémon FireRed and LeafGreen Versions.

Ivysaur appears as a moderately large, blue, squat, quadrupedal saurian with the plant on its back now in the form of a pink bud and large green leaves. The bulb formerly on its back has grown and partially bloomed both to exposure from sunlight and apparently from drawing energy from Ivysaur's own body, which also gets stronger when it absorbs sunlight. The budding flower is heavy enough that Ivysaur appears to lose the ability to stand on its hind legs, but its four legs and trunk grow thick and strong from the weight of the flower, even as a quadruped. If it starts spending more time lying in the sunlight, it is a sign that the bud will bloom into a large flower soon, which would be heralded by the bud giving off a sweet, pleasant aroma and the specie's evolution into its final form, Venusaur.

Ivysaur is a dual Grass/Poison-type and has traits of both types. The bulb on its back is used by Ivysaur to produce food for itself by performing photosynthesis. The ability to use photosynthesis grants an Ivysaur the ability to create food at will without having to eat unless there isn't any sunlight, in which case it could not be able to do so. The bulb has the ability to use Sweet Scent, which Ivysaur can use to attract other Ivysaur as well as other Bulbasaur and Venusaur (since they all belong to the same Pokémon family). Being part Grass-type, an Ivysaur's movepool consists of a lot of Grass-type attacks including Vine Whip, Energy Ball, and the powerful Solarbeam attack. When using solarbeam, an Ivysaur gathers solar energy into its bulb and blasts a beam of solar energy at a foe with extreme power though this attack is weaker when it is raining or cloudy and it takes two full turns to fully charge. Ivysaur can also produce several types of powders from their bulbs to inflict a status element onto an enemy including: Sleep Powder, Stun Spore (paralyzes an enemy), and Poison Powder. These powders assist Ivysaur a lot in battle as they can disable a foe by putting them to sleep, paralyzing them, or poisoning them, respectively.

Ivysaur can use Poison-type attacks as well including: Venoshock, Poison Powder, and Sludge Bomb. Ivysaur can produce and shoot out poison from its body if its Grass-type attacks won't be able to help it in a dual. Once a foe is poisoned, an Ivysaur can easily cripple the enemy, as it attacks the enemy, the enemy will slowly lose hit points due to being poisoned. A convenient ability Ivysaur have is that are immune to be poisoned. An Ivysaur cannot be poisoned from an external source but they can still take damage from Poison-type attacks. Ivysaur are rare in the wild and are typically a captive species of Pokémon. When in the wild however, they typically prefer to live in forests and grasslands.

Ivysaur do have a couple of weaknesses including: Fire, Flying, Ice, and Psychic-typed attacks all deal super effective damage on an Ivysaur. They are fairly bulky Pokémon and are better defensively than they are offensively. Ivysaur evolves from Bulbasaur at level 16, and then evolves into Venusaur at level 32, making Ivysaur a middle-stage Pokémon in its family.

Ivysaur is briefly mentioned in both Venusaur's and Bulbasaur's trophy descriptions. 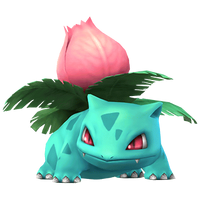 Ivysaur makes its debut in the Super Smash Bros. series in its third installment, Super Smash Bros. Brawl. It is playable as one of the three Pokémon used by the Pokémon Trainer, with the other two being Squirtle and Charizard. It is presumably the middleweight out of the three and comes equipped with a Tether Recovery Up Special attack.

Ivysaur
A Seed Pokémon that is the evolved form of Bulbasaur. It has a flower bulb on its back, the weight of which has made it develop strong legs and hips. If the blossom gets too big, the Pokémon can't stand on two legs alone. At a certain level, it evolves into Venusaur. When this happens, the bulb absorbs nutrients and blossoms into a large-petaled flower.

Ivysaur did not return as a playable character in Super Smash Bros. for Nintendo 3DS and Wii U, with Squirtle and the Pokémon Trainer also sharing that distinction. However, it does make an appearance as a collectible trophy for both versions of the game.

Ivysaur
Watching your starter Pokémon evolve is an unforgettable experience. For many trainers, that first happened when Bulbasaur became Ivysaur. It might be difficult to say good-bye to cute little Bulbasaur, but before they know it, they'll be saying bye to Ivysaur, too, as it turns into a fully grown Venusaur!