This article is about Isabelle's appearance in Super Smash Bros. Ultimate. For other uses see Isabelle.

Isabelle is a newcomer fighter in Super Smash Bros. Ultimate, serving as an unlockable character. She was confirmed in a surprise announcement during the September 13th Nintendo Direct.

When unlocked, she is fought at Town and City.

Isabelle overall has poor reception competitively, even being outclassed by her counterpart Villager, who also does not fair well in the meta game. Very few dedicated players main Isabelle, and the few that do have little to no tournament success.

Isabelle has numerous flaws, which are far from compensated, including below average mobility, poor damage output, short range, and tools that often can not force an approach. In addition, her primary recovery move, Balloon Trip, is somewhat slow moving and leaves her vulnerable the entire time. While she does have her fishing rod as a tether recovery option, this is somewhat situational. Outside of characters with even worse mobility than her, those with large hurt boxes, and slow projectiles, Isabelle does not fare well.

Outside of the update which significantly reduced shield damage of projectiles, she has been buffed significantly overtime. But, when combining the new meta game threats of DLC, and other characters receiving buffs, the benefits are not as noticeable. This is in addition to most of Isabelle's key flaws not being addressed, resulting in her remaining as a very exploitable, "one trick pony" character.

Isabelle's opponents are composed of nearly every female challenger that appears in the base game. The only base roster female characters absent are Dark Samus and Spiky-eared Pichu. Popo of the Ice Climbers is the only male character fought in this route, because neither Popo nor Nana can spawn alone, regardless of which one is the leader. Additionally, the music that plays in each round alters, with odd numbered routes playing title themes from the Animal Crossing series, and even numbered routes playing music from that stage's home universe.

Although Isabelle does not appear in the World of Light opening cutscene, she was vaporized and later imprisoned alongside the rest of the fighters (sans Kirby) when Galeem unleashed his beams of light.

She can be found near a small town on a secluded road, that requires the spirit of Kapp'n (Wild World) to be driven through a tunnel to reach. Freeing her unlocks a path to the town.

Using her Fishing Rod with Goldeen on Tortimer Island

Isabelle using her Down Smash with Squirtle

Dr. Wiley bowing down to Isabelle 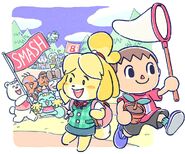