When he appears, he uses what is normally a utility effect, a Psynergy spell called "Move", as his in-game battle effect, which creates an energy field in the shape of a giant hand three times in total that pushes foes away and off the stage. He will turn to face enemies during this attack should they attempt to evade. However, like in the Golden Sun series, the move does no damage.

This move was present in Golden Sun and The Lost Age for the GBA, where it was the first psynergy Isaac, Garet, and Felix could learn. It allowed the adepts to push movable objects, usually to solve a puzzle in a dungeon.

Unlike many other smash trophies, his attacks can pierce invincibility stars, since they just "Move" the opponent and don't do damage, so even invincible opponents could be knocked off the stage.

To unlock Isaac, one must play 200 matches in Brawl, or related modes.

A strong-willed Psynergy adept of the bloodline of an ancient race thought to have been lost with the downfall of civilization. He can manipulate earth-based forces and is also a highly skilled swordsman. He sets out to protect a lighthouse that can release the sealed powers of alchemy. In Smash Bros., he uses "Move" Psynergy, which creates an energy field that pushes foes away.

Issac returns as an Assist Trophy in Ultimate acting similarly as he did in Brawl. Unlike Brawl, he can slam the hand down in a fist formation and grab opponents with his hand and slam them onto the ground. He will turn to face enemies during this attack should they attempt to evade. However, like in the Golden Sun series, the move does no damage.

Isaac originally appeared in Golden Sun, an RPG-style game for the GBA. The game focused on Isaac and friends' quest to retrieve the four elemental stars and stop the return of Alchemy, following thier theft by the games' first two antagonists, Saturos and Menardi. Isaac is the main playable character in the game, and he is one of the four playable characters capable of wielding Psynergy, a form of mind power. Isaac is a Venus Adept, meaning he can manipulate Earth and plants. As the game progresses, Isaac and friends gain access to a wider variety of Psynergy necessary to progress through the game.

Isaac returns in the game's sequel, Golden Sun: The Lost Age, but instead appears as one of eight party members led by the game's protagonist, Felix. This game explains the story from Felix's point of view, and focuses on Felix and the full party as they are forced to return the flow of Alchemy to save their parents' lives, which are being threatened by the game's new antagonists, Karst and Agatio, as they continue what Saturos and Menardi could not after their death in the first game.

He also briefly appears in the most recent game in the series, Golden Sun: Dark Dawn, this time as the father of the main character, Matthew. While joining Matthew's party at the beginning of the game, he is not seen for the rest of the game's plot.

The Psynergy that Isaac uses in Brawl is called Move. It is a Utility Psynergy - that is, it cannot be used in battle, and it is acquired virtually at the start of the game. "Move" is used primarily to move heavy objects to solve puzzles. The use in Brawl is somewhat different; while it does move obstacles, it simply pushes them away in order to achieve a wide variety of different ends.

In Ultimate, the additional Psynergy that Isaac can use is called Pound, which originated from the sequel game, Golden Sun: The Lost Age. Unlike Move, which is an innate ability, Pound can be learned by equipping the Pound Cube. Also, like Move, it's usage in the original game versus in Ultimate is different, as in The Lost Age, it's primary use is to solve puzzles by flattening wooden posts and destroying stone pillars, and aside from impeding certain Djinn from advancing to an inaccessible area, it lacks offensive means. 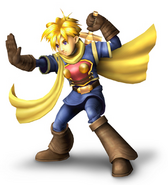 Isaac's artwork from Golden Sun.
Add a photo to this gallery

Retrieved from "https://supersmashbros.fandom.com/wiki/Isaac?oldid=587955"
Community content is available under CC-BY-SA unless otherwise noted.