The Interrupted Final Smash glitch or Regenerating terrain glitch is a glitch in Super Smash Bros. Brawl that causes certain Final Smashes to stay in their activated state if the character is inside a piece of terrain that has just regenerated.

Stages the glitch is possible on

Common versions of the glitch

The Golden Glitch. Note that Kirby is using Inhale even though in Final Smash standby mode. 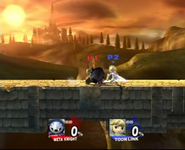 The invincible glitch.
Add a photo to this gallery

Retrieved from "https://supersmashbros.fandom.com/wiki/Interrupted_Final_Smash_glitch?oldid=579444"
Community content is available under CC-BY-SA unless otherwise noted.