This article is about the Inklings' appearance in Super Smash Bros. Ultimate. For other uses, see Inklings.

Yuki Tsujii
Inkling is a Newcomer fighter in Super Smash Bros. Ultimate. They were revealed in the first teaser trailer for the game, which aired on March 8, 2018.

When unlocked, the girl Inkling is fought at Moray Towers.

Complete one of the following:

For the first two methods, the player must fight and defeat Inkling on Moray Towers.

The Inkling is considered a completely new addition to the roster, as the moveset takes strong inspiration from the Splatoon games. Using multiple weapons from the games (mainly the Splattershot), the Inkling has the unique attribute of mainly using ink to battle opponents, in which players who get temporarily covered in it take more damage from any attack. Some attacks, like the Splattershot and Splat Roller, even leave ink on the ground which slows down opponents who walk in it. Most of the Inkling's attacks use ink, including smash attacks, and the Splattershot may be considered the main way to quickly cover enemies entirely in ink. However, just like in its home series, the Inkling has a limited ink supply, which if it runs out, special attacks and smash attacks will become weaker, some special attacks becoming useless without it. To work around this, the player can press B while shielding to turn into the Inkling's squid form to refill the ink tank. Thusly, the Inkling's strategy works around the concept of controlling the ink supply and using the ink to keep opponents at a disadvantage in both movement and damage percentage.

Inkling was initially seen as a very promising character in the meta and a potential top tier in Ultimate. This was due to her outstanding frame data, damage output through the ink mechanic, safe aerials on shield, the ability to effectively edgeguard and ledgetrap with her great recovery and down-special, and KO confirms off of grab and Roller. In addition, her dash was highly praised as an incredible mechanic that allowed her to invalidate many attacks and projectiles. Inkling saw strong results in the first half of 2019 from players such as Cosmos, Space, Chag, and Abadango. Cosmos, in particular, saw multiple top 8 placements in many tournaments and was ranked just outside of the top 10 for the first season.

However, following the first season, results from Inkling started to decline, with her top players either doing worse in tournaments or completely dropping the character. Cosmos notably used the character less and less before ultimately dropping her in favor of Pyra and Mythra. Top players attributed these drops due to Inkling's weaknesses becoming more apparent in reducing her viability, such as her lack of strong out-of-shield options and difficulty in killing past confirm percentages. Her tier placement is debatable to this day: although some Smashers such as Tweek, ESAM and Samsora still consider her to be among the best characters in the game, others point out her weaknesses and diminishing results as evidence that she was not as strong as people had made her out to be.

Inkling fights opponents with differently colored alternate costumes matching the general color scheme of the stage, referencing the concept of Turf War from the Splatoon games. The boss of this route, Marx, also fits in with this theme due to his multicolored wings.

The Inklings (both female and male) were among the fighters that were summoned to fight the army of Master Hands.

During the opening cutscene, the Inklings were present on the cliffside when Galeem unleashed his beams of light. They decided to submerge in a puddle of their ink to hide in the hopes they might not be imprisoned: however, this proved ineffective when the beams of light destroyed the cliff they were on and they were found. Both were then placed under Galeem's imprisonment alongside the rest of the fighters, except for Kirby.

In the mode proper, the female Inkling can be fought in a city area, in a space that clearly is Moray Towers.

The Palette Swaps for the Inkling are divided between two sexes; the default Female and alternate skin Male.

Inkling refilling its tank with ink.

Artwork of Inking that was released on the Splatoon Twitter 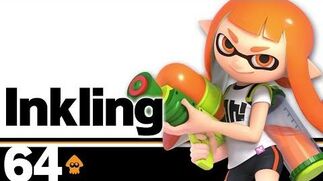