However, despite these buffs Ike still remains relatively slow on the ground in comparison to other fighters, making his grounded approach somewhat predictable. The buffs that faster sword fighters received also means that Ike is more prone to being juggled and pressured due to his heavyweight status. His Forward Aerial, one of his most notable tools in previous titles, was weakened in terms of utility due to not being able to autocancel out of a short hop and possessing more end lag. Finally, Ike's recovery is still rather poor, if not even more exploitable due to Ragnell no longer clipping through the stage.

At the beginning of the game’s release, Ike was seen as a significantly improved character from the previous installment, where he was considered a low-mid tier character. At that time, the metagame involved the prominence of disjoints, which benefitted Ike. Thanks to this, Ike developed very strong results, especially from MkLeo. This caused him to have a positive reception, with ZeRo, ESAM, and Mew2King designating him as a high-tier character. However, Ike has been less popular since MkLeo dropped him in favor of other characters. As the metagame progressed, players began to adapt to Ike's gameplan, with his perception worsening due to his over-reliance on slow, predictable aerials (especially forward aerial) which were prone to perfect shielding. Additionally, characters like Cloud and Sonic were progressing their metagame at the same time. Due to most people considering Ike's gameplan too limited and predictable, Ike was commonly considered to be in the mid or upper-mid tier.

When patch 8.0.0 dropped, Ike received numerous buffs and a nerf. His neutral aerial, which was once his best combo starter and his main neutral tool, now has more knockback, allowing for fewer follow-ups, most notably his up aerial for a kill confirm. Although this can be seen as a nerf, it also serves as an indirect buff to allow Ike to rely less on his neutral aerial and instead use more moves and not have one-dimensional, linear gameplay. His Aether became a better out of shield option, and it and his dash attack now have more KO power and kill much earlier. Down tilt has less knockback, giving it more combo potential and allowing it more KO setups at higher percents. Lastly, his forward air has more damage and less ending lag, making it safer to use in the air, especially for edge-guarding. These buffs further improved his perception in the community and Ike is now seen as an upper-mid to high-tier character. Maister, in particular, believes that Ike is one of Mr. Game & Watch's few losing matchups, if not his worst matchup. As a result, this iteration is generally considered to be his best one in Smash yet, achieving arguably the best tournament results relative to his previous incarnations.

In more recent times, the COVID-19 pandemic caused the shift towards online play, and his tournament results have improved in the Wi-Fi meta. Perfect shielding is harder to perform due to input lag, allowing his moves like his aerials and tilts to be safer on shields. This aids players to perform well online, with Yez and Ravenking representing Ike's online scene; as they ranked 14th and 35th in the Wi-Fi Warrior Rank v6 respectively. Additionally, MkLeo used Ike to win a reverse 3-0 in Grand Finals and a 3-0 reset in Ultimate 32 while facing Maister, allowing him to rank 6th in Wi-Fi Warrior Rank v6.

Ike's opponents are all fighters in black alternate costumes, referencing his rivalry with the Black Knight.

Although Ike does not appear in the World of Light opening cutscene, he was vaporized and later imprisoned alongside the rest of the fighters (sans Kirby) when Galeem unleashed his beams of light.

Ike was one of the many fighters that fell under Dharkon's control upon Galeem's first defeat. He is one of the fighters found in the Mysterious Dimension sub-area, being an obligatory unlock before the next necessary fighter battle, Meta Knight is encountered, and after Greninja has been awakened. 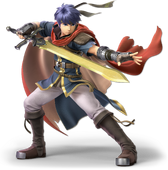 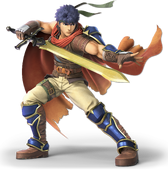 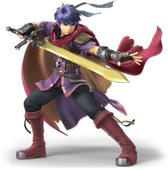 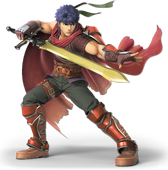 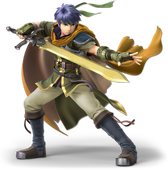 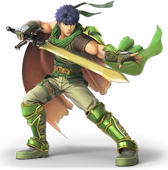 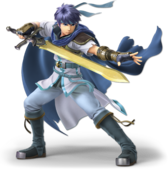 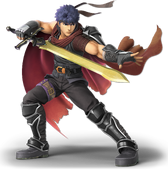 Ike along with Roy and Kirby in the Arena Ferox stage.

Ike along with Byleth and Kirby in the Garreg Mach Monastery stage.