This article is about Ike's appearance in Super Smash Bros. Brawl. For other uses, see Ike.

Michihiko Hagi
Ike (アイク, Aiku) is a starter newcomer in Super Smash Bros. Brawl from the Fire Emblem universe. He was announced as a newcomer on the Smash DOJO! on August 7, 2007.

Ike is a moderately heavy character with slow, but powerful attacks and a high KO abillity. Most of his attacks are for close-combat and usually need accurate timing to execute, and he often needs to use his special attacks . Ike is considered a slow character in the game due to his slow attacks and slow ground and air speed. Most of his attacks though possess high damage, high knockback, and good range, giving Ike startling killing potential at low damages. Ike is also one of the best characters to crouch-cancel a jab with, as the move can accrue upwards of 20% on opponents when crouch-canceling the original hit into another jab a few times (the initial jab can itself be linked easily from a neutral-aerial). Ike works best when playing the range game, best maximized by using his forward-air whenever retreating. His fair has the distinction of having the most horizontal attack range of any normal aerial in the game. Though Ike himself is slow, his attacks will surprise opponents when hitting from maximum range. Using the attack to effectively approach depending on the situation, Ike can pursue follow ups such as more fairs, his far-reaching dash attack, or an attempt at outwitting the foe into his Quick Draw forward special. However, all three of those moves are very punishable if they miss. At a distance, one can even use Quick Draw to punish on wake-up because of the move's ability to be held indefinitely.

Should Ike have to deal with opponents close in, he can easily use his competent jab to either put the spacing back on or to transfer to a throw, with either the back or forward variants capable of putting the opponent in a vulnerable position should they be at the edge. Though more effective as a kill, Ike's back-air is amazingly fast and can catch opponents off-guard, should the player be in a position to chase or attack in-close. If the close-in war is being waged at the edge, Ike can be an effective edge guarder, having his long-ranged fair, his d-tilt spike, his Aether special, and his deadly dair spike or bair as options to harass the opponent (as well as the aforementioned jab/throws). Ike is also one of the game's deadliest air-dodge/roll trappers, given his far-reaching forward smash and its tremendous power; it is a useful move so long as Ike is never predictable with it. Up-smash can be also be used in this fashion due to its similarly wide sweeping motion, and is preferable to Ike's down-smash for punishing excessive rolling and also giving him the ability to have a surprisingly long hyphen smash considering his dash speed.

However, Ike definitely has his drawbacks. His dash speed is fairly slow, and he is as big a target as Marth (Same body structure). His Counter activates at frame 10 (as opposed to Marth's counter which takes only four frames to activate), thereby requiring some prediction to use effectively. On the other hand, Ike's counter frames end six frames later than Marth's (both of their counters last for about 59 frames, 23 of them being counter frames), making him less vulnerable afterwards. Ike's recovery is also somewhat predictable, but usually weak, making him subject to self-destructing from an ill-placed recovery. He has a short second jump and only two main recovery moves (Quick Draw and Aether) with limited trajectories and both cannot be used in the same recovery. Quick Draw needs to be charged to get far, and is easily blocked by anyone willing to get hit by it before Ike can reach the ledge, making him extremely vulnerable to low-angle attacks and edge guarding. Aether is very predictable but also difficult to guard against by any character with short ranged attack, due to the knockback resistance the move grants and the fact that Ike's sword reaches the ledge long before he does. Still, he is vulnerable to edgehogging as it does not grab the ledge until he is descending with the attack and most characters have at least one attack that can knock Ike out of Aether, though the long duration of the move along with the risk of getting spiked if the hog isn't timed properly makes it somewhat hard to edge hog. It is also vulnerable to gimps from moves that push others away (e.g. Mario's F.L.U.D.D. or Squirtle's Water Gun). Also, Ike lacks a projectile, and is himself extremely vulnerable to projectile camping. His attacks can generally be avoided/dodged easily because of the massive starting lag on all of his attacks, though with the range of his Fair and Nair it avoids shield grabs when spaced properly because of their range (not even King Dedede can shield grab a well spaced Fair). Because he is a large heavyweight with fast falling speed, he is susceptible to Chain grabs and Wall of Pain, although he is isn't quite as vulnerable to it as many other heavyweights.

Ike's first appearance is at the Battlefield Fortress, helping out fellow Fire Emblem hero, Marth, and his new partner, Meta Knight, by halting the Ancient Minister's escape with his trusted Aether move (though he says Great Aether), which also destroys the Subspace Bomb (making Ike the only character in Subspace Emissary to successfully disarm a Subspace Bomb). He then teams up with the two swordsmen. Getting Ike to join your party in the SSE results in unlocking the song Ike's Theme for use on the stage Castle Siege.

Ike and his team are later seen in the The Wilds, tracking a tank. The three then chase after it, only to find that it is the Subspace robot, Galleom. Galleom is defeated, but jumps off the cliff and into The Ruined Hall, where Lucas and Pokémon Trainer defeat it once more. Upon its defeat, Galleom grabs the two and attempts suicide with its built in Subspace Bomb. Fortunately, Meta Knight rescues Lucas and Pokémon Trainer, and brings them back to Marth and Ike.

Ike is briefly seen at the Glacial Peak level when they see the battle between the Halberd and Great Fox, in which at that point, Meta Knight leaves the party. The Ice Climbers, who have fallen off the mountain, join Ike's group just in time for a large battle with the Subspace Army. Luckily, Mario and Link's team arrive to help out, after which they join up.

Ike's next appearance is at the Entrance to Subspace level, where he can be used. Ike is one of the many to be turned into a trophy by Tabuu's Off Waves. Fortunately, his trophy can be picked up at the first Subspace level. Once he has rejoined the team, he is available for use in the The Great Maze, as well as against Tabuu.

These stickers can only be used by Ike or by a select few including Ike. 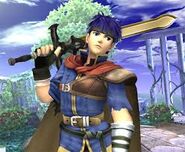 Ike on Battlefield
Community content is available under CC-BY-SA unless otherwise noted.
Advertisement