Official artwork of Ike from Path of Radiance.

Ike (アイク, Aiku) is the main playable hero in the ninth installment of the Fire Emblem series of tactical role-playing games, Fire Emblem: Path of Radiance, and also appears in a main role in its sequel, Fire Emblem: Radiant Dawn. Ike is one of the more "recent" Fire Emblem protagonists and was the first one to appear in a Fire Emblem console game that was released outside of Japan, and he has been confirmed to appear in Super Smash Bros. Brawl as a playable character.

In Path of Radiance, Ike serves the traditional role of the Fire Emblem main protagonist in that the epic story revolves around him and his efforts of heroism, and that in terms of gameplay he is the game's one Lord-class playable unit. Unlike most other playable characters, Ike is a character that absolutely must not die in battle. He is skilled with the sword, and by the end of Path of Radiance he gains two invaluable assets that separate him from other characters: the Aether character skill, which gives Ike a chance to perform a powerful two-hit combination attack; and the game's ultimate weapon, Ragnell, an indestructible gold sword with high power and accuracy.

In the actual story of Path of Radiance, however, Ike is the second to break the tradition of a Fire Emblem protagonist being a noble or a member of royality (the first being Arum from Fire Emblem Gaiden); he is a mercenary along with several others in a group under the command of his father who is killed early in the game by an enigmatic knight. Ike and the other mercenaries must protect and escort the crown princess of a beseiged kingdom, as the continent of Tellius, previously wracked by conflict and animosity between humans ("beorc") and transformable demi-humans ("laguz"), bears witness to the uprising of another war incited by a belligerent neighboring kingdom.

The game's sequel, Fire Emblem: Radiant Dawn, extends the story and brings the overall story full-circle. The story takes place three years after the events of Path of Radience, and war engulfs Tellius once again as the various kingdoms attempt to reestablish themselves. The strings behind this conflict are being pulled by the machinations of an empire's senators, and the various laguz tribes ally among themselves to declare war against the country's corrupt senate.

Ike, for being the second Fire Emblem protagonist to star in more than one game in the series after Marth and the first to appear on two subsequent games released internationally on consoles. His appearance is based on his younger Path of Radiance incarnation rather than his older, more muscular Radiant Dawn incarnation, and his attire is what he wears while in his initial Ranger character class. 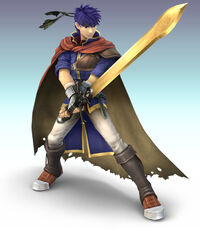 Ike is the first Fire Emblem character to be revealed as a playable character in Super Smash Bros. series, wearing his battle-worn Ranger-class outfit. He clearly adheres to the human-swordsman aesthetic upheld by Marth and Roy in Melee, and his sword, Ragnell, appears especially hefty and long-range. Ike's attacks have long range and has one of the slowest, but most powerful attacks. Ike also comes with his trademark Aether skill as a technique, which gives him hyper armor for the duration of the attack.

Retrieved from "https://supersmashbros.fandom.com/wiki/Ike?oldid=109656"
Community content is available under CC-BY-SA unless otherwise noted.