By 2005, the Fire Emblem series of tactical role-playing fantasy video games had fully been established as an internationally famous and successful franchise, thanks in no small part to the inclusion of previous Fire Emblem protagonists Marth and Roy in 2001's immensely successful Super Smash Bros. Melee as playable characters. Following Melee's release, subsequent Fire Emblem titles were released internationally, including the seventh installment for Game Boy Advance set on the same continent of Elibe as the sixth (the one starring Roy), the eighth installment on GBA (The Sacred Stones) set on a stand-alone universe/continent named Magvel, and the ninth game for GameCube (Path of Radiance) set on another new continent/universe named Tellius. PoR is the first console Fire Emblem to be released internationally, and it stars Ike as the protagonist, and the tenth installment for Wii (Radiant Dawn) is a storyline sequel set in Tellius, where a slightly older Ike plays as one of the main characters

In the story of Path of Radiance, Ike is the first, and so far only main character, to break the tradition of a Fire Emblem protagonist being a noble or prince. He is a mercenary along with several others in a group under the command of his father, Greil. Ike and the Greil Mercenaries must protect and escort the princess of the soon-to-be-besieged country of Crimea, Elincia, as the continent of Tellius, previously wrecked by conflict and animosity between humans ("Beorc") and transformable demi-humans ("Laguz"), bares witness to the uprising of another war incited by the country of Daein. During the quest, Ike becomes arch-enemies with an enigmatic Daein general known as the Black Knight for murdering Greil, and Ike and his younger sister Mist learn terrible truths about their pasts later on, even as their expanding group must attempt to heal scars and gain the trust of the various Laguz kingdoms. Eventually, Elincia formally bestows the Lord rank to Ike so that he can lead the armies of Crimea and the theocracy of Begnion into battle against Daein, and after finding the willpower to wield the sacred blade Ragnell, he takes the fight to Daein's officers in their homeland, and clashes against the Black Knight wielding the dark sword Alondite. The finale sees Ike finally battling and defeating Daein's megalomaniac wyvern-riding king, Ashnard; with this accomplished, the continent is saved from utter destruction and Beorc-Laguz relations become more positive, and Ike is content with reverting to the life of a mercenary.

Ike, for being the second Fire Emblem protagonist to star in more than one game in the series after Marth and the first to appear on two subsequent games released internationally on consoles, is one of the better-known Fire Emblem heroes.

Ragnell (ラグネル, Raguneru?) is Ike's sword. It is a two-handed sword blessed by the goddess Ashera, making it unbreakable, and was created to defeat the goddess Yune, which was undertaken by the First Apostle Altina.

In Path of Radiance, Ragnell was in the possession of the Black Knight, who offers it to Greil for a duel, but is rejected, a decision that proves to be fatal for Greil. Ragnell later falls into the possession of Ike, which he uses in the final confrontation against the Black Knight, and emerges triumphant. After he defeats the Mad King Ashnard, he passes the weapon into the hands of the Apostle Sanaki.

In Radiant Dawn, Ike receives Ragnell from Sanaki upon being appointed commander of the Apostle's Army as a down payment, and uses it in the fight against Zelgius, and at the story's climax against Ashera. However, Ragnell is imbued with Yune's power instead in the latter fight, and Ike lands the finishing blow to the goddess with the very blade she blessed.

Ike uses Ragnell in all of his attacks except his pummel and throws. 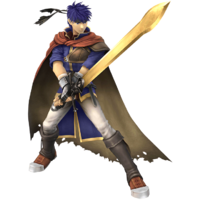 Ike is a starting newcomer in Super Smash Bros. Brawl, being confirmed on August 7, 2007 as the second Fire Emblem representative alongside veteran Marth. His design is based off of his appearance from Fire Emblem: Path of Radiance. In a stark contrast to Marth's quick fighting style, Ike focuses on slow, yet powerful attacks to inflict high damage and launch opponents, and is a heavyweight, giving him better endurance than Marth.

Ike's Final Smash is Great Aether, which consists of a series of sword swings and kicks imbued with fire before colliding with the stage in a massive explision

Ike
A member of Crimea's top fighting force, the Greil Mercenaries. He's a man of few words whose blunt manner gives the impression that he's uncaring, but he's actually a passionate hero. He was crucial to the reconstruction of Crimea. In Radiant Dawn, he continues to show his deep sense of honor and leads the Greil Mercenaries to the aid of the Laguz Alliance. 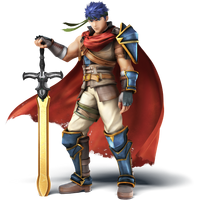 Ike returns as a playable character in Super Smash Bros. for Nintendo 3DS and Wii U. His design from this game has been changed to match his appearance in his Hero class from Fire Emblem: Radiant Dawn.

While Ike's moveset is no different from what it was in Brawl, both the flame effects in Eruption and Great Aether are now properly colored blue, referencing his blessing by the goddess Yune at the end of Fire Emblem: Radiant Dawn, during which his sword is cloaked in blue fire.

Ike
One of the main characters from the Fire Emblem series. Having fought in the Mad King's War, restored the fallen nation of Crimea, and taken on the Begnion Empire, Ike is rightly called a hero. He has the strength to back the title—one good swing of his blade can launch the heaviest of foes.

Ike (Alt.)
Ike's side smash is a powerful two-handed sword strike. It's one of the best launch attacks in the entire game, though it will leave you wide open when you use it. For Eruption, one of his specials, you stab the ground and unleash a pillar of fire. Charging for too long will hurt Ike, so be careful! 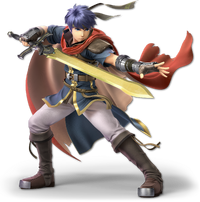 Ike returns to the series in Super Smash Bros. Ultimate, being an unlockable character for the first time. Ike is newly voiced by Greg Chun, his voice actor since Fire Emblem Heroes. In addition, both his Path of Radiance and Radiant Dawn costumes from previous titles are both available for Ike to use.