Smashpedia
Register
Don't have an account?
Sign In
Advertisement
in: Attacks, Special Attacks, Side Special Moves,
and 3 more

Ice Slasher is Mega Man's Side Special Move that can be used via Customizations. Mega Man shoots an ice projectile. If it hits an opponent at a high percentage, they will be frozen, causing 4% damage.

Ice Slasher launches enemies into the air when they are hit by it and freezes them, giving Mega Man a chance for some aerial combos and attacks without any interruption by the opponent. At high percentages, it can kill off the ceiling when the opponents are launched. The projectile will keep going even if it hits an opponent. If it is used in the air at the beginning and then again in the same frame Mega Man lands on the ground after launching the first one, another one will pop out. This also works with Danger Wrap. However, it has sub-par range, so Mega Man will have to space himself strategically to ensure the move will hit; the projectile itself doesn't deal much damage and the freezing effect only lasts just over a second.

Ice Slasher is the special weapon that Mega Man obtains by defeating Ice Man, debuting in the first Mega Man game. It actually dealt no damage to enemies and merely froze them in place, allowing Mega Man to slip by without wasting time on them. It did do damage to Fire Man, however, as that was the latter's weakness. In later appearances, it was given the ability to cause damage. 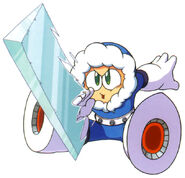