This move is mimicked by the CPU Ice Climber if it is with the human-controlled one, so two shots at a time can be shot along the floor. Unfortunately, it shrinks in size as it slides, making long range Ice Shots undesirable.

Although this attack only does around 2% damage, it can be very useful in attacking and defending if used correctly. With both Climbers, two Ice Shots will be shot out. If used in midair, the Ice Shots fall fast until they hit the ground, and they travel very fast down slopes. If one gets reflected, the other can cancel it out. In Brawl, if the CPU Climber is present, using Blizzard or Squall Hammer, then immediately using Ice Shot may result in both Climbers facing different directions, shooting an Ice Shot left and right simultaneously. If used immediately after a jump, Ice Shot will send the Ice Climbers up a small distance up, like Mario's Cape.

It is possible for a highly damaged opponent to be frozen by Ice Shot, but the chances are slim. Using Ice Shot at very close range can catch enemies with both the ice and the hammers.

In Brawl, shielding will send the Ice Shot back at the Climbers, but none of them will do any damage to the Climbers who shot it.

In Melee, the projectile was able to absorbed by Ness' PSI Magnet to replenish his energy, but in Brawl it works as a solid item (meaning it has no energy properties and thus can not be absorbed by the magnet) and breaks through it (and Lucas's). Also in Melee, the hammers laid physical damage to those to close to the Ice Climbers while executing the attack (upward knockback). This as well is not in Brawl. 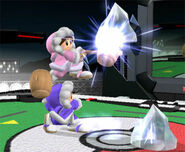 Ice Shot in Brawl.
Add a photo to this gallery

While this move seems to be unique to Melee and Brawl, it is likely based on the enemies named Topi in Ice Climber. They could push a similar piece of ice, to block gaps. Of course, these pieces of ice were harmful to the Ice Climbers, and they would lose a life if they come into contact with the ice.

Retrieved from "https://supersmashbros.fandom.com/wiki/Ice_Shot?oldid=471210"
Community content is available under CC-BY-SA unless otherwise noted.