This article is about the Ice Climbers' appearance in Super Smash Bros. Melee. For the characters more generally, see Ice Climbers; for the CPU Mode, see NANA.

They currently rank 8th on the official tier list thanks to their amazing camping game, solid aerial and ground game, but primarily due to their extensive and intricate grab game that can completely shut down opponents once it begins. However, if Nana is KO'd, Popo cannot use special moves correctly and is somewhat helpless during recovery. 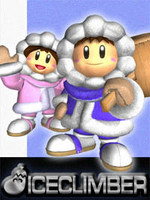 The Ice Climbers have the unique property of being a "two in one" character, as Popo and Nana must work together very well in order to be an effective fighter. Nana can be unresponsive at times and killed at low damage when she is separated from Popo, but she can also be somewhat of a shield for some attacks. The Ice Climbers's attacks are generally fairly short-ranged. Even so, advanced players can do massive damage with the Ice Climbers due to their strong ground game. On the downside, the Ice Climbers are awkward when forced to fight in the air. The Ice Climbers's projectile, Ice Shot, is good for edgeguarding and can't be avoided by ducking because it is a ground hugging projectile. However, Popo and Nana are easily disrupted by opponents' projectiles.

The Ice Climbers have the second lowest traction when they aren't fighting on ice, where they have the highest. This makes them have a very long wavedash, but it also makes approaching difficult. The Ice Climbers have good, powerful juggling tactics, but they themselves are vulnerable to air combos and juggling due to being floaty. Their Up Special Move, Belay, travels great distance, but it can often kill Nana. The Ice Climbers can do an infinite grab known as Wobbling (which is generally tournament legal) and the freeze glitch (which is not tournament legal).

Where the Ice Climbers really shine is grabs. Although their grab range isn't impressive, they still have high-damage grab combos, including ones that can kill opponents from 0% damage. They also have some of the best chaingrabs in the game. The Ice Climbers themselves are difficult to grab because since only one can be grabbed, the one that isn't grabbed can interrupt the thrower. A professional Ice Climbers player should make the most of their grabs in order to perform well.

Note: A majority of the move summaries refer to the combined damage of the both Ice Climbers; with the partner usually dealing 1% less than the leader due to stale move negation.

Desynching is a technique that involves separating the two Climbers' animations and controlling them individually, allowing them to do different techniques at the same time.

In addition to the normal trophy about the Ice Climbers as a character, there are two trophies about them as a fighter, unlocked by completing the Adventure and All-Star modes respectively with the Ice Climbers on any difficulty.

Ice Climbers:
That's Popo in the blue and Nana in the pink. These two stars of the game Ice Climber have scaled many an ice summit in their mountaineering careers. Back in their glory days, they chased eggplants, cucumbers, and other vegetables that inexplicably fell from frosty summits where a condor reigned supreme. They're rarely seen apart.

Ice Climbers (Smash Red)
This unique twosome fights together as a team. Your score will not be affected if the CPU-controlled character is KO'd, but a lone Ice Climber won't be able to use teamwork moves, which will make for a tough and frantic solo fight. The Ice Shot fires mini-glaciers out of their hammers, while Squall Hammer is at its strongest when Nana and Popo combine their strength.

Ice Climbers (Smash Blue)
The colors of the Ice Climbers' parkas denote who's in the lead: Nana's in pink or orange, while Popo's in green or blue. Their hairstyles are also slightly different. Belay allows them to cover great distances, but doesn't give foes the chance to target their landing. Blizzard is best used in close quarters; in the fray, Nana and Popo sometimes freeze opponents.