Sanae Kobayashi
The Ice Climbers (アイスクライマー, Aisu Kuraimā?), are the pair of playable protagonists from the game Ice Climber, released in the pre-Super Mario Bros. era of NES games. When playing one player, the player plays as Popo (ポポ). When playing two player in Ice Climber, player one plays as Popo, while player two plays as Nana (ナナ). In both Melee and Brawl, both Ice Climbers appear, but only Popo is controlled, while Nana mimics the moves performed by Popo. However, color changes allow players to control Nana instead of Popo. Despite not being displayed, the CPU-controlled Climber in the Super Smash Bros. series, does indeed have his or her own separate percentage or stamina counter. This factor alone results in the Ice Climbers' extremely high learning curve for all the games they have appeared in, as players must ensure the safety of not one, but two characters at the same time.

Both of the Ice Climbers are small in size. They both wield wooden mallets, which they used to whack enemies and break ice cubes. Both of them wear parkas; Popo's parka is blue, while Nana's is pink. They can also be identified by the patch of hair exposed from their hoods. Relationship-wise, several fans believed them to be siblings, or even spouses, despite their young appearance, but according to Nintendo, the nature of their relationship is up to the player's imagination. However, during Melee's development, it was said that Sakurai wanted them to be lovers.

The Ice Climbers made their debut appearance in the Super Smash Bros. series, after sixteen years of the release of their original game. They are a dual-controlled pair of fighters, making them unique compared to the other fighters. They, as a singular entity, are one of the 14 default characters available from the start. Most players had no idea who they were.

They were selected over Balloon Fighter and Pit, among others, to be representatives of the Famicom/NES period of Nintendo's history.[1]

Ice Climbers
That's Popo in the blue and Nana in the pink. These two stars of the game Ice Climber, have scaled many an icy summit in their mountaineering careers. Back in their glory days, they chased eggplants, cucumbers, and other vegetables that inexplicably fell from frosty summits when a condor reigned supreme. They're rarely seen apart.

Ice Climbers [Smash]
This unique twosome fights together as a team. Your score will not be affected if the CPU-controlled character is KO'd, but a lone Ice Climber won't be able to use teamwork moves, which will make for a tough and frantic solo fight. The Ice Shot fires mini-glaciers out of their hammers, while Squall Hammer is at its strongest when Nana and Popo combine their strength.

Ice Climbers [Smash]
The colors of the Ice Climbers' parkas denote who's in the lead: Nana's in pink or orange, while Popo's in green or blue. Their hairstyles are also slightly different. Belay allows them to cover great distances, but doesn't give foes the chance to target their landing. Blizzard is best used in close quarters; in the fray, Nana and Popo sometimes freeze opponents. 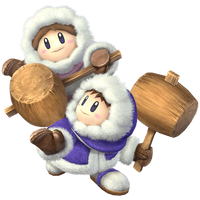 The Ice Climbers yet again consist of the duo Popo and Nana. They still fight as a pair with Nana following along. With Nana, special moves are better than just being Popo. Both Ice Climbers can now hang on a ledge at the same time and their Down Special in the air is no longer an auto-freeze. The Ice Climbers' Final Smash consists of a large iceberg taking up a large portion of the screen. The iceberg can damage, and eventually freezes, enemies who come near it. Like in Melee, the character can switch between Popo or Nana as the leader of the duo based on which color of costume is chosen.

Ice Climbers
The one in blue is Popo, and the one in pink is Nana. They use their incredible jumping powers and hammers to break blocks and climb to the summit. They grab veggies, and if they can catch the condor at the end, they conquer the mountain. Other than breaking blocks, their hammers are good for sending foes flying, climbing down from blocks, and destroying icicles.

The Ice Climbers do not return as playable characters for Super Smash Bros. for Nintendo 3DS and Wii U, although they appear in both versions as a collectible trophy. According to Masahiro Sakurai, the Ice Climbers were fully functional in the Wii U version, but because the 3DS has a lack of hardware power, he was forced to cut the Ice Climbers from both versions so that they share the same roster because Sakurai did not want version-exclusive characters.[2] Additionally, they were deemed as low-priority characters since it was very unlikely that the duo would have a new game in their series.

Ice Climbers
This pair of adventurers starred in an action game released in 1985. Popo wears blue, and Nana wears red. The goal of their adventure was to reach the top of the mountain, collecting vegetables and defeating animals along the way. Grabbing the condor earned them a nice bonus too!