Hyper Bomb is Mega Man's Neutral Special Move that can be used via Customizations. Mega Man throws a bomb at the opponent that goes in an arching motion. The bomb will not explode until it touches an enemy or solid ground. It can be thrown in 8 directions and can be grabbed as an item, like the Metal Blade.

The Hyper Bomb is a move that can be unpredictable due to its arcing trajectory, forcing opponents to be wary. Due to the arc, it can keep airborne opponents at bay. It can be thrown in eight different directions, just like the Metal Blade. Throwing it backwards while opponents are coming up behind Mega Man is a good way to surprise them. When thrown straight up, it falls right back down to Mega Man; this can keep opponents from going over Mega Man from above. When thrown down, the bomb actually bounces off the ground, spins in the air for a moment, and then explodes. This could provide some close-range attacks with this move and possible defensive options, however, these can be hard to pull off and require good timing because of the move's starting lag. Opponents on the ground will be otherwise hard to hit unless they are standing at the bomb's landing point, and few opponents will simply stand there to be hit. If they do stand there, they could perfect shield, which causes the bomb to glance off of them. Hyper Bomb has the highest ending-lag, as after throwing the bomb leaves Mega Man wide-open.

In the first Mega Man game, Mega Man receives this weapon from Bomb Man. The weapon is Guts Man's weakness, and unlike it's Smash Bros. incarnation, the bomb bounces and then explodes. 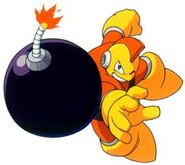