Hydreigon appears in Super Smash Bros. for Nintendo Wii U on the Kalos Pokémon League stage as a background character in the Dragonmark Chamber along with Axew, Dragonite, and Garchomp.

As Kalos Pokémon League is a returning stage, Hydreigon is returning as well.

NA: Unlike Scizor with its pretend heads, Hydreigon's three heads are real! The center head is the brains of the operation, while the left and right ones are there to consume everything they can. We wouldn't be surprised to see Hydreigon at an eating contest, but there has to be a rule against having three mouths on one body...?

PAL: Unlike Scizor's head-like claws, the heads at the end of Hydreigon's arms are the real deal. Only the head in the middle does any thinking - the other two are just for gobbling up anything in sight. If you think about it, Hydreigon would probably win any eating contest hands down, but... maybe having three mouths is against the rules... 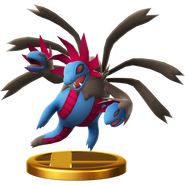