In Brawl, Toon Link uses his to perform the Tether Recovery and grab. Similar to Link's clawshot, if it misses, Toon Link is left wide open. It also has two hitboxes that follow the same mechanic from Link's Clawshot. Toon Link's Hookshot has a shorter range in grabs and tethers when compared to Link's Clawshot, but makes up for it by being slightly faster. As is the case with all tether recoveries in Brawl, the clawshot/hookshot may only latch onto the ledge, making edgehogging the recovery relatively easy. 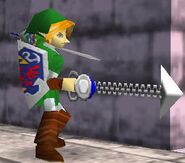 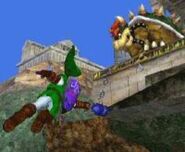 Link's Hookshot being used as a Wall-Grapple in Melee.

Toon Link preparing to use his Hookshot in Brawl.

Toon Link's Hookshot fully extended in Brawl.
Add a photo to this gallery

The Clawshot is Link's grab in Super Smash Bros. Brawl. Although it's very similar to the Hookshot in Super Smash Bros. Melee, not only does it retract more quickly, but Link's new Tether Recovery now finds and tracks the wall, automatically sweetspotting a nearby ledge instead of just latching onto it when it touches. Also, when used in the air to attack, there are two different hitboxes. The first is when the claw is shot out, and hits the opponent. The second hitbox is at the end of the Clawshot, when the claw closes. Also, if Link lands while using the clawshot in the air, the move auto-cancels, which is a useful technique when combined with SHFFL, quite possibly Link's best tactic for interrupting other characters' approaches. If the player misses while using this on the ground, there is a large ending lag that leaves Link very vulnerable to attack. It should also be noted that if it fails, Link doesn't enter Helpless state. In most cases it's recommended to use the Clawshot for recovery because it helps prevent Link from getting edgeguarded by certain attacks.

The Clawshot has an invaluable edgehogging property in that it can quickly give Link more invincibility frames by pressing back after Link has grabbed the edge, and immediately pressing "Z" releasing the clawshot, and pressing "Z" again to instantly grab the ledge and gain invincibility frames. This technique is sometimes referred to as Zair Edgeguarding, even though it is used as an edgehogging technique.

The reason why the two are named differently is because the Link in Super Smash Bros. Brawl is based on his "Twilight Princess" model, where the item in the game is called the "Clawshot", instead of the old "Hookshot" from Ocarina of Time. 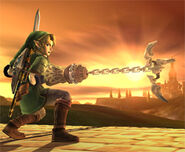 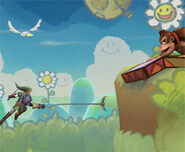 Link's Clawshot missing the ledge.
Add a photo to this gallery
Retrieved from "https://supersmashbros.fandom.com/wiki/Hookshot_and_Clawshot?oldid=542487"
Community content is available under CC-BY-SA unless otherwise noted.