N/A
Honedge (ヒトツキ Hitotsuki) is a dual Steel/Ghost-Type Pokémon from the Pokémon universe.

Honedge appears in Super Smash Bros. for Nintendo Wii U on the Kalos Pokémon League stage as a background character in the Ironworks Chamber along with Scizor, Klinklang, and Steelix.

NA: The origin of this Pokémon is a great ghost tale: It's said that Honedge are ancient swords possessed by a departed spirit. Should people try to grab the sword, Honedge will attack them or wrap its sash around their arm, slowly draining the life energy from their body. Moral of the story: be careful around ancient swords.

PAL: There's a rather spooky tale behind this Pokémon's origins: apparently, it's an ancient sword possessed by a departed spirit. Honedge won't let anyone grip its hilt. If they try, it will attack them or wrap its sash around their arm and drain the life energy from their body! Yikes! 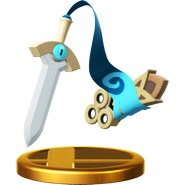