The Home-Run Bat's model from Super Smash Bros. for Nintendo 3DS/Wii U

Home-Run Bat (ホームランバット, hōmu ran batto?) is an item used in all five Smash Bros. games and is best known for its instant KO potential.

While the Home-Run Bat functions like regular battering items, it has the unusual property of completely altering the character's forward smash. Upon performing a forward smash, the character winds up and uses an extremely powerful attack that can potentially KO opponents in a single hit. The attack always takes a set amount of time and cannot be charged, making it the only such item to alter this mechanic in players. With that being said, Super Smash Bros. has the fastest wind-up time. In Super Smash Bros. and Melee, characters use their standard item swinging animation, however Brawl and 3DS/Wii U changed the animations so that all characters wind up like actual baseball players. This altered wind-up, however, causes the actual attack to be considerably slower than in previous games. In 3DS/Wii U, the smash attack swing is comparably faster than in Brawl, and the user in addition gains super armor at the very moment he or she swings the bat, making it more difficult to interrupt compared to previous games. The Home-Run Bat deals most of its damage at the tip of the bat instead of the centre; the extreme knockback in both of these hitboxes, however, makes this point relatively moot against other players. The Bat is also powerful when thrown, dealing 30% damage and high knockback. The bat swing can also reflect projectiles, like the one used by Ness in his forward smash.

The bat is also an item in Smash Tour: when its trophy is selected, the user starts the battle wielding a Home-Run Bat.

In the Home-Run Contest, the player is given a Home-Run Bat to assist in sending the Sandbag as far away from the starting platform as possible. While acting as a primary way to hit Sandbag, some attacks can potentially send it farther than the actual weapon at certain damages, including throwing the Home-Run Bat itself.

Smash an enemy with this slugger, and you'll send them flying out of sight; hence the name Home-Run Bat. The sound of the bat being swung immediately strikes fear into the hearts of the opponents and can turn the tide of a battle. It's slightly risky to use, though; it has a very limited range, and it takes a little time to wind up for your swing.

A battering item. Smash a foe with this and be rewarded with the distinctive "KREEEEENG!" sound of a home run as your foe goes flying. The sound echoes with what's surely the timbre of supreme bliss. For the character being hit, though, it must be one of the scariest sounds ever. But it's not easy to use-- it swings slowly and has a limited range. High risk, high reward.

Combine this black bat with a side smash to try for a home run, using an opponent as the ball! Unfortunately, the reach on the bat is not all that impressive, so it takes some real skill to line up a hit. Keep your chin up, though--the loud "KREEENG" of a hit makes it all worthwhile. 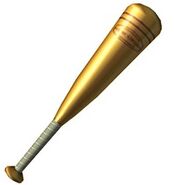 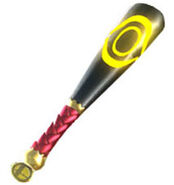 Bowser being indefinitely KO'd by Peach with a Home-Run Bat

Zero Suit Samus KO the Ice Climbers with the bat.

It's so powerful that your eyes might bug out!! 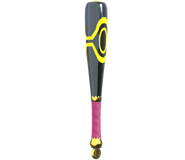