Rare
Ho-oh (ホウオウ, Hō'ō, Houou in Japanese language versions) is a Pokémon that comes out of a Poké Ball.

Ho-oh is treated as a "legendary" Poké Ball Pokémon; its chance of appearing is much rarer than most of the others, and in return its effect is more powerful. Ho-oh uses its signature move from the RPGs, Sacred Fire. Ho-oh will fly up into the air and to the back of the screen when it's summoned. Once Ho-oh starts flying upwards, any character other than the summoner that makes contact with it will be damaged. Ho-oh will then release a column of fire. Any character other than the summoner that is caught in the column of fire will take massive damage, and they won't be able to escape.

The attack occurs a full seven seconds after Ho-oh's release, making it the longest delay for a Pokémon attack. Ho-oh covers a very large attack area, although the heavy delay and predictability of the attack's location (it always appears where Ho-oh was released) makes it relatively easy to avoid, although the summoner can try to make sure that his/her opponents will be in that particular spot when the attack actually occurs.

Ho-oh features as a collectible trophy, unlocked as one of the 100+ trophies that can be collected randomly during normal play, such as in the Trophy Lottery and throughout the various Single-player Regular Matches. It reads as follows:

Ho-oh:
As it soars around the skies of the world, this Rainbow Pokemon leaves a trail of rainbows and myths in its wake. Its signature move is called Sacred Fire, and it is believed to appear only before trainers who are pure of heart. If you see a trainer with Ho-oh, you can assume that catching it took a lot of work. (Pokemon Gold & Silver 10/10)

Ho-Oh returns in Brawl. As in Melee, it continues to use Sacred Fire. However, in Brawl, the pillar of fire is larger and can interfere with vision. A character who touches the pillar of fire will be sucked down into the center of the pillar. This means if Ho-oh is released from its Poké Ball at the very edge of a stage, anyone who touches the fire pillar will be sucked down and subsequently meteor smashed. It also performs knockback at the end of the move. Most think Ho-oh was buffed from Super Smash Bros. Melee to Super Smash Bros. Brawl.

Ho-oh
A Rainbow Pokémon. On sparkling wings of seven colors, Ho-oh leaves a rainbow behind as it flies. Legend says that Ho-oh suppressed a war that scorched the land in ancient times. Its attack Sacred Fire can melt ice in an instant and also damage the target with burns. Ho-Oh will show its solemn figure only for the most righteous Trainers.

Ho-oh appears in Super Smash Bros. for Nintendo Wii U as a stage hazard in Kalos Pokémon League.

This Pokémon flies through the skies on rainbow-colored wings and is said to promise eternal happiness to all who see it. Supposedly, it appears every once in a while in the Fire-type Elite Four Trainer's room in the Kalos Pokémon League stage. Its screams cause pillars of fire to rise all the way to the ceiling. 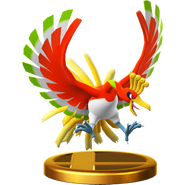 Ho-oh's trophy in Super Smash Bros. for Wii U.
Community content is available under CC-BY-SA unless otherwise noted.
Advertisement