Hero (or The Hero) is a downloadable newcomer in Super Smash Bros. Ultimate from the Dragon Quest universe. He is classified as fighter #72. His inclusion was revealed at the Nintendo Direct presentation during E3 2019, and was released on July 30, 2019.

Hero possesses four different variations as alternate costumes, specifically the Heroes from Dragon Quest XI (the Luminary, who serves as the default outfit), Dragon Quest III (Erdrick), Dragon Quest IV (Solo), and Dragon Quest VIII (Eight). Hero's sword and shield will also change depending on the outfit, similarly to Cloud and Bayonetta, although this is purely aesthetic.

Hero possesses a mechanic known as the MP Gauge, located above his damage meter and having a maximum of 100 MP. By using a Special Move the MP Gauge depletes by the move's MP Cost, shown by the Command Menu and visualized by a portion of the bar being colored green (with the exception of Frizz, Zap, and Woosh). A Special Move cannot be activated if the MP Gauge does not have the sufficient amount of MP, and it will reset if Hero is KO'd. The MP Gauge refills over time, though it fills faster when landing attacks, with the amount of MP regained equalling 90% of the damage Hero deals.

Hero's Smash attacks have a 12% chance to deal a critical hit, where they deal double damage and knockback, and trigger the Special Zoom and a unique sound effect. If shielded, the sound effect will still play to indicate the smash attack being a Critical Hit, though it only deals extra shield damage. 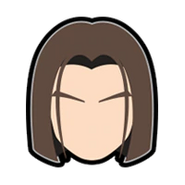 Eight along with Kirby in the Yggdrasil's Altar stage.
Add a photo to this gallery

Retrieved from "https://supersmashbros.fandom.com/wiki/Hero_(Super_Smash_Bros._Ultimate)?oldid=593863"
Community content is available under CC-BY-SA unless otherwise noted.