The Hero's Bow is Link's and Toon Link's Neutral Special Move, excluding Link's in Super Smash Bros., where it is the Boomerang instead. There are differences with each Link's Hero Bow, though they all involve firing an arrow which is useful for stopping foes or camping, and holding B will greatly increase the range of the arrow fired.

Hero's Bow (named Bow in Melee) is Link's and Toon Link's Standard Special Move attack in Super Smash Bros. Brawl. As pointed out by Sakurai, it is faster than its Melee counterpart. Even when the attack isn't charged up, the arrows fly farther than in Melee. Toon Link's arrows shoot at a very slight upwards angle and has a noticeable slower speed than Link's. 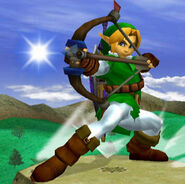 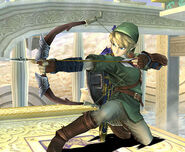 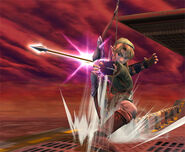 Power Bow is one of Link's Neutral Special Moves that can be used via customization. The arrows do not go as far, but if fully charged they will cause a lot of damage.

Link's Power Bow is a devastating attack, having massive damage and kill power when fully charged. The fully charged version also has great range and good speed to it. Unfortunately, firing it uncharged has atrocious range and speed; the move takes a while to charge up, but fully charging it will certainly pay off.

Quickfire Bow is one of Link's Neutral Special Moves that can be used via customization. Link can fire arrows rapidly, and though they don't do much damage, they pass through the first opponent they hit to hit others.

The Quickfire Bow is a move that trades out damage for sheer speed. The move only deals about 5% damage, but fully charges up very quickly. The arrow also moves very fast through the air, but has a short range on it.

Quickfire Bow
Add a photo to this gallery

Piercing Arrow is one of Toon Link's Neutral Special Moves that can be used via customization. Toon Link fires high-speed arrows that do less damage.

Piercing Arrow has a few uses but these could be nullified by opponents unless put in the hands of a player that knows how to use it. The arrow flies very fast through the air and will go through opponents that it hits; this results in less knockback, which can lead into some combos. The move deals less damage and has less range, so it probably won't hit if the opponent is smart enough to keep their distance.

Fire Arrow is one of Toon Link's Neutral Special Moves that can be used via customization. Toon Link fires a flaming arrow at close range, which can set the ground where it lands on fire. It is similar to Young Link's Fire Bow.

The Fire Arrow is a short range projectile but deals more damage to opponents. Due to the angle at which it falls, it can gimp opponents that are trying to recover low to the stage. The fire left by the arrow when it hits the ground can damage opponents as well but has low knockback that can lead into combos as well as creating an obstacle on the stage for a brief time that gives Toon Link a tool for stage control.

Fire Bow is a variation of the Hero's Bow, and it is Young Link's Standard Special Move in Melee. With this version, Young Link shoots flaming arrows that do not travel as far as Link's and do slightly less damage. However, it has more hitstun than the other bows, and sets the foe on fire. 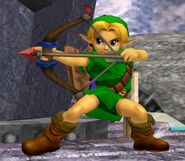 Young Link charging the Fire Bow.
Add a photo to this gallery

The Bow is one of Link's main weapons in The Legend of Zelda series. In Ocarina of Time, Link could use fire arrows, as well as ice and light arrows. In Melee, Link and Young Link's bow are based on its Ocarina of Time appearance; this is odd, as Young Link could not use the Bow in Ocarina of Time, but had his own version in Majora's Mask. In Brawl, Link's bow is derived from Twilight Princess, while Toon Link's is from The Wind Waker.

Link can turn around in midair, if the backwards direction key is pressed right after the bow is taken out. However, if combined with the Quickdraw technique, a glitch may occur in which Link points his bow in one direction, but the arrow is fired in the other direction. This can be avoided if the bow is initiated in the air just before Link touches the ground, instead of the same instant Link touches the ground.

Retrieved from "https://supersmashbros.fandom.com/wiki/Hero%27s_Bow?oldid=585725"
Community content is available under CC-BY-SA unless otherwise noted.