Helpless (also known as free fall and various other names, and called "fallspecial" in game data) is a state in which characters are unable to take any action, with the exception of grabbing a ledge, maneuvering left/right, fastfalling, or climbing a ladder, until they land on the ground. Helplessness is typically associated with just having used one's triple jump, although it also occurs after using certain other special moves (usually ones which help recovery).

Helplessness most commonly ends upon landing on the ground, although it also ends if characters flinch, allowing them to attack or re-use their triple jump. A helpless character is denoted by both a black overlay and a distinct falling animation.

A state similar to helplessness exists in falling after having one's shield broken and then being stunned.

Curiously, the helpless state gives characters an extra ability in Super Smash Bros.: the ability to fall through soft platforms without landing on them. Starting in Melee, this can be done at any time (not just when a character is helpless).

As a unique animation is used for falling while helpless, characters enter a different animation than usual once they land on the ground. This is called "landfallspecial" internally in Melee. Because air dodging enters this state and wavedashing involves air dodging into the ground, when wavedashing is performed in Melee's debug menu, "landfallspecial" appears for the character state. This originally led some players to believe that the "landfallspecial" designation was specifically designed for wavedashing and that developers put wavedashing in the game intentionally, further fueling the various debates over wavedashing's legitimacy. At one point, the myth morphed to where, instead of just "landfallspecial", there was purportedly another debug mode designation, cited as "superdashtechnique", "superdashattack", or other supposed variants, created solely for the wavedashing animation. All incarnations of this story have been proven false, and should not be themselves taken as evidence that wavedashing was intentionally put or left in Melee. 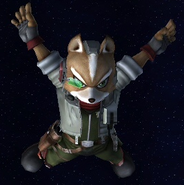 Fox's helpless animation in Brawl.
Add a photo to this gallery

Retrieved from "https://supersmashbros.fandom.com/wiki/Helpless?oldid=563153"
Community content is available under CC-BY-SA unless otherwise noted.