Headbutt is Donkey Kong's Side Special Move. Donkey Kong performs a headbutt that can bury opponents.

This attack can Meteor Smash an opponent if used in midair, or plow them into the ground, rendering them temporarily immobile, if used against opponents on the ground. It can be utilized to break shields.

In Melee, nothing other than auto-release due to time can dig out the trapped victim. This was changed in Brawl, where Headbutt is useful for performing a KO combo. Trapping then opponent, then using a fully charged Giant Punch or Side Smash can result in a KO. This combo has a higher chance of working if the opponent has a medium to high damage percentage, since the higher their damage is, the longer the opponent will stay stuck.

The Headbutt can be used like a Cape glide, allowing Donkey Kong to go slightly forward and decrease his falling speed, though it is slightly inferior to Mario's. 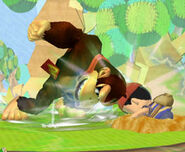 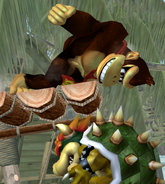 Jumping Headbutt is the same as the default Headbutt, but in the start of the move, Donkey Kong will jump up defore he does it, this move buries opponents for a short time.

The Jumping Headbutt's leap can be useful for dodging some smaller projectiles since they will pass underneath Donkey Kong. The leap, though short, can assist in recovery as Donkey Kong will grab the edge of the stage. However, the headbutt itself does not bury opponents for as long as the default.

As the name Implies, Stubborn Headbutt makes Donkey Kong impossible to be interrupted while doing the move, this customization is slower than the default Headbutt.

The Stubborn Headbutt is uninterruptable as it has Super Armor during all frames of the attack. Opponents that try to interrupt it by attacking Donkey Kong will only be buried in the ground. The move also has an impressive range to it, with the hitboxes extending well past Donkey Kong's head. The move is very slow though, unlikely to hit an opponent that is smart enough to get out of the way.

Retrieved from "https://supersmashbros.fandom.com/wiki/Headbutt?oldid=589079"
Community content is available under CC-BY-SA unless otherwise noted.