Hand Grenade is Snake's Neutral Special Move. Snake takes a grenade, pulls out the pin, and throws it.

The distance that the grenade is thrown can be controlled by pressing forward, backward, or pressing no direction at all. A maximum of two grenades can be thrown; no more can be produced until one of them explodes.

Unlike Link's Bombs, it does not explode on contact and the enemy can grab it before it explodes, and if hit by the grenade itself, opponents will receive 1-5% damage with no knockback, and the grenade will bounce off their head. The grenade can be "cooked" by holding B (as it is thrown when B is released) to reduce the time between the moment it is thrown and the moment it detonates - the grenades detonates after three seconds, so "cooking" it for two seconds and then throwing it when it is close to exploding is a wise strategy.

Also, Grenades are unique from Bombs or Vegetables in that they take priority over held items; that is, Snake will still perform the move while holding an item. Anything he carries will be dropped as soon as he pulls the grenade.

Interestingly, the Hand Grenade cannot be held while shielding. Attempting to do so will cause Snake to drop the grenade at his feet. This can be used in various ways, such as dropping it, and then picking it up again to throw in a more traditional way, or dodging an incoming attack, which will leave the grenade behind, which will likely be set off when the attacking player hits it. For some reason, this also makes any of his grenades that are being carried or even thrown by another player to fall straight down.

A great advantage of the Grenade is that the explosion isn't affected by Stale-Move Negation. 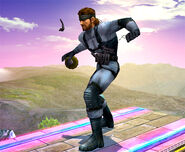 Snake pulling the pin of a Hand Grenade. 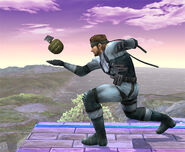 Soft Throw
Tilt back while throwing. 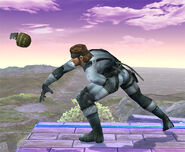 Mid Throw
Don't tilt at all while throwing. 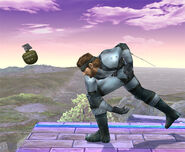 A close up of the grenade.
Add a photo to this gallery

Hand grenades have always been a staple offensive tool in the Metal Gear series. They can easily be found in lockers, store rooms, or obtained from enemy soldiers. The grenades Snake uses in Brawl appear to be M67 fragmentation grenades.

Retrieved from "https://supersmashbros.fandom.com/wiki/Hand_Grenade?oldid=551384"
Community content is available under CC-BY-SA unless otherwise noted.