The Hammer Bro., or Hammer Brother, is a common enemy found in the Super Mario series.

A Hammer Bro. appears in Brawl as a helper which can be released from an Assist Trophy. It throws its famous hammers at its enemies and is invulnerable. It also appears as a common enemy in Adventure Mode, where it acts similar to its Assist Trophy role but can be hit by attacks and defeated. It appears as both a collectible trophy and sticker.

A character who throws a seemingly endless stream of hammers. Hammer Bros. have also been known to jump every so often. Since they throw their hammers in a high arc, if you manage to get in close, the hammers can't hit you. Unlike Koopas and Buzzy Beetles, Hammer Bros. don't reduce to their shells when jumped on. As the name suggests, most Hammer Bros. are found in pairs.

Hammer Bro. returns as a common enemy for Smash Run. He also returns as an Assist Trophy, and has the same functionality as in Brawl.

These elite trooper turtle usually appeared in pairs in Super Mario Bros., wearing helmets and chucking hammers at Mario. When summoned, they'll advance on the nearest opponent and lob hammers in a graceful arc. Sometimes they'll throw in a jump to mix things up.

Hammer bro. returns as one of the assist trophies you can get out. They throw around their hammers, and then disappear. 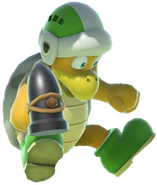 Hammer Bro. hurt
Add a photo to this gallery

Retrieved from "https://supersmashbros.fandom.com/wiki/Hammer_Bro.?oldid=581910"
Community content is available under CC-BY-SA unless otherwise noted.