The Hammer (ハンマー, Hanmā?), later evolved into Hammer Flip (鬼ごろし火炎ハンマー Oni Goroshi Kaen Hanmā(but still known as Hammer in PAL regions of Smash 4), is Kirby's Side Special Move. Kirby swings the hammer he gains from his Hammer ability in the Kirby series.

On the ground, Kirby swings it horizontally (as opposed to in the games, where he swings it vertically over his head to the ground in front of him), but in mid-air, he swings it vertically, more like in the games. This is altered in Super Smash Bros. Brawl; while being used in the air, he swings the same way, and is useful for racking up damage with difficulty in punishing it. The grounded version move is much better in Brawl, because it's as fast and has no sourspot, unlike Melee, where the sweetspot was tiny and the sourspot was very weak and punishable. When the move hits an enemy, it gives very high knockback, making it a good finisher, and one of Kirby's best KO moves in Brawl.

It is similar to King Dedede's Jet Hammer: Kirby being now able to hold the hammer to build power and move while doing it. However, charging it too much will start to cause damage to Kirby. Overcharging Hammer Flip does not give Kirby damage if he has 150% of damage or more. Hammer Flip gives Kirby Super Armor when fully charged while in its attack animation. The animation of a fully charged Hammer Flip, instead of the usual sideways swing, is instead an upwards one for both the ground and midair versions. The move is able to KO Mario as early as 25% damage on the center of an Ω form stage, and can KO at an average of 40%. Unsurprisingly, Hammer Flip, knockback-wise, remains Kirby's most powerful attack. It has less knockback when used in the air, but Kirby still swings twice if the attack is not fully charged.

Unlike the previous version, it does not help in air stalling. 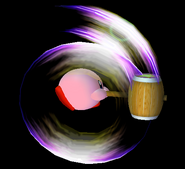 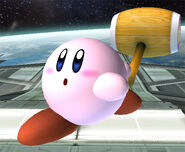 A slower and more powerful version of the Hammer Flip, the Giant Hammer has very high starting and ending lag, being slow to execute and making it poor for use against an opponent that is able to easily move around. The Grounding Stone and Ice Breath can help hold an enemy still for a powerful hit with the Giant Hammer, which deals more damage and kills much earlier than the regular Hammer Flip. The hitboxes are very large, which can make hitting an opponent with it easier to pull off, as well as the Super Armor while charging and holding the charge helping by keeping Kirby from losing the charge and hitting any opponent that tries to resist. Unfortunately, holding the charge damages Kirby just as it does with Hammer Flip, though the Giant Hammer racks up this self-inflicted damage much more quickly.

The second Hammer's customization is Hammer Bash (打ち上げハンマー). If Kirby hits an opponent with it, it will send them upward. The move can't be charged, resembling the defaut Hammer in Melee and Brawl.

Hammer is one of Kirby's many copied abilities from his various adventures. Kirby acguired this ability almost always from a gorilla-like miniboss called Bonkers. It is often one of the most powerful abilities, but is rather sluggish. The hammer is almost identical in appearance to King Dedede's.

The attack Kirby's using with the Hammer is based on Hammer Flip from Kirby Super Star,[1] complete with fire-like aura bursting off when Kirby performs it in Brawl. Unlike in Kirby Super Star, Kirby doesn't swing it upwards, instead he swings swings the hammer horizontally on front.

The Double Hammer could be based on Hammer Swing from Kirby Super Star. Kirby wasn't able to use this move in the air in his games, though.[2]

Usually in the Kirby games, Kirby would swing the hammer vertically when using on the ground, but when Kirby would use it in the air, he would perform Giant Swing. This makes Kirby spin while holding the hammer out and twirling it around his body. In Melee, when Kirby uses the Hammer in the air, he would perform a weaker but quicker Ultra Giant Swing from Kirby Super Star. This, along with Hammer Flip, seem to refer at the simple controls of Hammer from Kirby's Adventure.[3]

Giant Hammer is likely based on the move of the same name from Squeak Squad when Kirby gets hammer's ability scroll. It may also be (a stretch, if anything) based on the Grand Hammer Super Ability from Return to Dreamland, where shaking the Wii remote will cause the hammer to become bigger.

Due to Kirby crouching slightly out of the Z-axis when Kirby is walking while charging this move, Thoron will miss him. [1] It can also miss while standing still if the Hammer is fully charged.

This is one of the few special moves that can be used by a non-playable character (in Smash 4 by Bonkers, a character who already had a variation of this move in the original Kirby universe).