This article is about the item based on the original game Donkey Kong. For other uses, see Hammer (disambiguation).

In Super Smash Bros. for Nintendo 3DS and Wii U, any opponent getting hit by the hammer will cause the entire screen to freeze for a brief moment before continuing. In Super Smash Bros. Ultimate, only the opponent hit by the hammer and the user will briefly freeze before knockback, making it easier for other opponents to attack them at that time. Victims hit by the hammer will also give off an 8-bit effect. This is a nod to its origin game where if Mario breaks a barrel with the hammer, the screen will briefly freeze while the 8-bit effect flashes. Even the sound when breaking a barrel in its origin game can be heard when hitting an opponent with a hammer.

If you grab the Hammer, you'll run across the screen swinging it back and forth nonstop. In Donkey Kong, Mario used the Hammer in exactly the same fashion. It's an extremely powerful item, but you have no recovery move when you carry it. Every now and then, the mallet head will fall off, and you'll end up completely vulnerable, swinging just the handle.

An item that, once grabbed, makes you swing nonstop. It's a powerful attack item that does terrific damage and sends opponents sailing. Once in a great while, the hammer's head will fall off, leaving you nothing but the handle. Of course, you can't tell whether the head is securely fastened just by looking. Hammer heads that fall off can be picked up and thrown as weapons.

Once you grab this hammer, you can't help but keep swinging and swinging. Who needs special moves when you've got a hammer? And forget your second jump -- use that time to deliver a second lump! Oh, but the hammerhead isn't attached very well, so watch out if it pops off or something...

A hammer is just a stick until you add the top. That's where this item comes into play. Sometimes, however, the top comes off. If that happens, just grab this loose part and throw it at your enemies. For some poetic justice, make the guy swinging the hammer handle your first target. 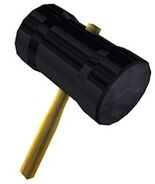 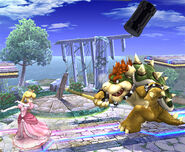 The hammer malfunctioning and losing its head.

Bowser with the Hammer in Smash 4

Head of the hammer.
Community content is available under CC-BY-SA unless otherwise noted.
Advertisement