Smashpedia
Register
Don't have an account?
Sign In
Advertisement
in: Attacks, Special Attacks, Down Special Moves,
and 6 more

Gyro is R.O.B.'s Down Special Move. The attack encompasses a spin toy that R.O.B. fires. It is chargeable; the longer it charges, the stronger and faster it becomes. A fully charged Gyro normally inflicts 18% of damage, and has high knockback. After being launched, it can be picked back up and thrown at the opponent, inflicting 10% of damage. An opponent can pick it up as well. It also acts like the Unira in that it will still cause damage on contact as long as it is spinning. Each R.O.B. can only have one originating gyro on the screen at any time, and can use Gyro again as soon as the previous gyro leaves the screen. If the move is attempted when R.O.B. cannot reuse his gyro, he goes into his Gyro-charging stance and makes a motion with his arms as if to spin a gyro, but no gyro appears. Much like Donkey Kong's Giant Punch and Samus's Charge Shot, Gyro does not attack instantly when used. Instead, its initial use begins a charging process. The move must be performed a second time to fire the gyro. It should also be noted that the AI of R.O.B is for some reason programed so that if R.O.B releases the Gyro he will constantly attempt to keep firing even though it is on the stage and cannot be shot again. 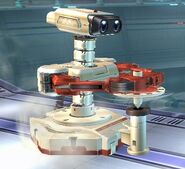 A gyro can be thrown at an opponent.

The "Gyro" is essentially a spinning top. The R.O.B. accessory for the Nintendo Entertainment System would spin the gyros on a spinner and use them to press buttons to activate in-game effects for the game Gyromite; the button would remain pressed only as long as the gyro retained enough speed to remain upright. The concept of the move in Brawl is exactly the same as when the gyros were spinning in the Spinner, but throwing the gyro is a new feature added in Brawl.

Fire Gyro is one of R.O.B.'s Down Special Moves that can be use via customizations. R.O.B. throws a flaming Gyro. The move has shorter time, but the damage is increased.

Slip Gyro is one of R.O.B.'s Down Special Moves that can be use via customizations. R.O.B. throws a Gyro that if it hits an opponent, they will Trip. The Gyro will spin straight forward rather than bouncing.