Guile (ガイル, (Guile, (ガイル,?) is a character from the Street Fighter universe. He appears in Super Smash Bros. Ultimate as an Assist Trophy.

When summoned, Guile will remain crouched in one place, frequently throwing his Sonic Boom special at enemies. When an opponent gets close he will immediately perform his Somersault Flash Kick. This odd habit seems to be in reference to a common playstyle that Guile players use throughout the series.

Guile is a Captain of the US Air Force and is frequently hunting down the evil Shadaloo warlord M. Bison in an attempt to avenge the supposed death of his friend Charlie Nash, although as seen in Street Fighter II, his quest for vengeance leads him to abandon his wife Jane and his daughter Amy. In his arcade ending, they forgive him and convince him to come back home, telling him that killing Bison won't bring Charlie back, and that it'd make Guile a murderer. Guile and a barely-alive Charlie would reunite in Street Fighter V, where Charlie had been rebuilt by the Illuminati and was now even more hellbent on destroying Bison than Guile himself was.

Guile continues to oppose Shadaloo's activities throughout the series and frequently works with Interpol officer Chun-Li.

As mentioned in Palutena's Guidance for Ken Masters, he and Guile are brothers-in-law thanks to their respective wives (Eliza and Jane) although the two Street Fighters cannot stand one another.

Guile is the main hero of the infamous live action Street Fighter movie (where he was portrayed by Belgian actor Jean Claude Van Damme) as well as one of the main heroes of the western-made cartoon.

Guile is stationary for the majority of his stay, firing Sonic Boom from his position, which travels about half of Final Destination. If an opponent gets too close, Guile uses Somersault Flash Kick, which knocks them away vertically. After around 15 seconds, Guile stands up and disappears. 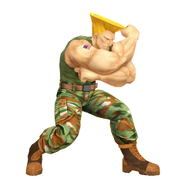