Yūji Ueda
Greninja (ゲッコウガ, Gekkōga?) is a fictional creature from the Pokémon series which debuted in Pokémon X and Pokémon Y. It appears as a playable fighter in Super Smash Bros. for Nintendo 3DS and Wii U and Super Smash Bros. Ultimate. 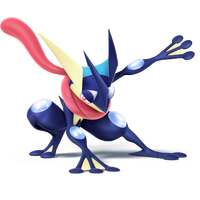 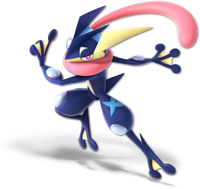 Greninja was confirmed to return in Ultimate on June 12, 2018 during E3 2018 along with every other character in the Smash Bros. series. Its Final Smash has been updated where it turns into Ash-Greninja. Because Ash-Greninja is something only male Greninjas can become, it's confirmed in this game that Greninja is male. He is currently the only non-gender difference-based playable Pokémon that has a confirmed gender.