Green Missile (ルイージロケット, Ruiji Roketto) is Luigi's Side Special Move. Luigi launches himself forward like a missile to hit the opponent headfirst.

By holding the Special Button down, the distance, damage, and knock back of Green Missile is increased, allowing Luigi to travel further and deal more damage. Upon making contact with an opponent, Luigi will knock the opponent backwards with fiery damage before landing on the ground. Green Missile deals 5-26% damage and goes half the distance of Final Destination.

The weakness of this attack is Mario/Dr.Mario's Cape/Cloak attack. It can turn you around when it is charging and force you off the edge.

Super Smash Bros. Brawl allows Luigi to hold this move at full charge indefinitely, and if a partially charged one hits a wall, occasionally, Luigi will get stuck for a brief moment and have to pull himself free. Also, he makes a spring noise as his body bobs up and down. Something not very well known about Luigi's Green Missile in Brawl is that it gives Luigi a slight vertical boost if used right after a jump. It's unknown why this occurs, but it could have something to do with Luigi's falling speed, which is normally slow. If this trick is used when Luigi is metal or is wearing a Bunny Hood (both of which increase a character's falling speed), that boost will be much higher.

In Super Smash Bros. for 3DS/Wii U, the moved is slightly nerfed since charging for over four seconds can overcharge the move, failing the use. This leaves Luigi in a tired state, leaving him vulnerable to attacks. The chances of misfire also have decreased, making it less risky near edges, but reduces its KO and recovery potential.

Green Missile provides Luigi a means of horizontal recovery (one of his most obvious flaws in the original Super Smash Bros.), though the amount of distance is dependent on its charge. Its damage also is dependent on the charge, having KO potential at 150%. A major drawback of Green Missile is its long charge and end lag, making Luigi extremely punishable if the move misses, as he lands on the ground. 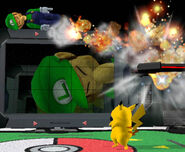 Luigi getting his head stuck in a wall.

Luigi tries to pull himself free.

Green Missile can be customized to become Floating Missile in Super Smash Bros. 3DS/Wii U. It charges up quickly and goes in a straight line, but deals less damage.

Floating Missile works much better as a recovery. Gravity stops affecting Luigi as he uses the move, so he travels in a straight horizontal path. The fast charge time means Luigi can get farther faster as well. The move deals less damage, but not much less than the considerable amount Green Missile delivers.

Quick Missile is Green Missile's other customization. Luigi can fly faster and farther than normal, but will slide across the ground if he fails to hit anything.

The Quick Missile is another reliable recovery due to the great distance and speed of the move even when uncharged. The move still deals considerable damage as well. The sliding has some good and bad qualities to it. Luigi can still damage opponents while sliding, but it will also make him vulnerable and easy to punish, similar to ending lag. Opponents can easily jump over Luigi and attack him while he is still sliding or getting up.