Play 20 Vs. Mode matches as Kirby.

The stage is made up of three floating islands. The island in the middle is the largest. There are two floating platforms over the middle island. The tree, Whispy Woods, in the middle of the middle island will occasionally blow gales of wind in a certain direction to disrupt the fight. Between the islands are blocks that stack up. You can break the blocks by attacking them. If you hit a bomb block, then there will be an explosion. The blocks will rebuild often after they are destroyed. Bomb blocks do 22% damage and have high knockback. The two islands to the left and right are somewhat small compared to middle island, and are usually where most of the fighting occurs.

Also, Whispy Woods will shake and drop apples from the tree. If players are on the middle section when this occurs, they will be damaged by them. Once on the ground, the apples can be one of two types of item: that which picked up and thrown at enemies, or a food item used to heal.

A few glitches can occur on this stage: 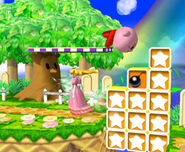