Artwork of a Goomba in New Super Mario Bros.

Goombas are a staple of the Mario series, having appeared in the first game and every game since. They are often the first enemy Mario runs into, and are thus his weakest enemy. Their only attack is just walking around, and they will walk off an edge if it appears.

They are easily defeated, and it only takes one jump on their heads to kill them. Due to how weak they are, it is considered a disgrace to be killed by a Goomba.

Goombas are mushroom like monsters and common enemies that appear in the Mushroom Kingdom stage of Super Smash Bros. Melee's Adventure Mode, as well as in crates, barrels, capsules, and Party Balls. Goombas walk back and forth on the arena and often walk off the edge (if present). If the player makes contact with one, they will take damage. Jumping on them, attacking them, or throwing them will KO them. For every Goomba the player KOs, they get 150 points added to their Goomba KO bonus.

8-Bit Goombas also appear in the Kingdom stage, harmlessly moving about in the background.

In versus mode, Goomba can inflict 8% damage on a player. In Adventure Mode, the amount of damage it inflicts depends on the difficulty setting.

Goombas are actually traitors who've defected from the Mushroom Kingdom's forces. They're a slow and predictable nuisance, as they always try to wander into Mario's path. Fortunately for Mario, they don't have much stamina, as a single jump on the head is generally enough to defeat them.

Goomba is a special stage that can only be played in Event 14: Trophy Tussle 1.

The characters' battle takes place on top of an enlarged Goomba trophy, which can be won upon completing the event. The edges of the head can be grabbed if a character tries to recover.

Goombas make an appearance in Super Smash Bros. Brawl's Subspace Emissary as enemies. Unlike their Melee counterparts, Goombas cannot hurt players simply by running into them. Instead, they will now charge the player at a slow running speed. A single jump on the head will easily put a single Goomba out of commission. They are less bright and shiny than in Super Smash Bros. Melee.

Although Goombas are never specifically stated to be members of the Subspace Army, they serve as subordinates of Bowser, who is known to be a high-ranking member. This implies that they are at least honorary members.

A citizen of the Mushroom Kingdom who sided with Bowser when he invaded. Goombas slowly chase after Mario on stubby legs. They're not the toughest creatures and can generally be defeated by jumping on them, which makes them disappear. They have fierce fangs, but they don't seem to serve any purpose. Though a nuisance to Mario, they're decent at baseball and mah-jongg.

A Giant Goomba next to Donkey and Diddy.

1000
Giant Goombas (デカクリボー Dekakuribō) are enemies found in various stages where Bowser's minions are present in Super Smash Bros. Brawl. Unlike their smaller counterparts, they are resilient to physical attacks and require three jumps on the head to dispose of them. Giant Goombas can take 8-9 jumps on the head on higher difficulties.

A giant-sized Goomba, as the name suggests. In Super Mario 64, punching and kicking had no effect on this brute. It could be stopped like normal Goombas- by jumping on it from above. A colossal Goomba appeared as the boss of world four in New Super Mario Bros., but that's a Mega Goomba, not a Giant Goomba.

Both Goomba and Giant Goomba returns as a common enemy for Smash Run.

Once loyal to the Mushroom Kingdom, the Goombas switched sides when Bowser invaded. Not that it mattered--they weren't really mighty warriors. In Smash bros., they are equally weak, simply running at you. They must expect to get stomped by now... Don't expect a lot of fanfare for beating one.

It's a Goomba, only bigger! And much like normal Goombas, the worst they'll do is run at you. Unfortunately, their size actually makes this attack pretty dangerous! They can also stomp to knock you off your feet. They have a lot of health, but they take massive damage from being stomped on, just like a regular Goomba. Fortunate!

In Super Mario Bros., the first enemy Mario encounters is a Goomba. I lost a life to it just seconds after starting! If you add some easily removable wings to that creature, you've got yourself a Paragoomba. Flying mushrooms--that really does just sound nuts.

In Ultimate, a Goomba appears as a collectable spirit which can be found at World of Light, located at the Light Realm. It can also be challenged through the Spirit Board, purchased from the shop for 500G, or simply obtained by scanning the Goomba amiibo. It is a Novice rank Primary Spirit of the Neutral type.

The spirit battle takes place at Mushroomy Kingdom's Battlefield form and the music that plays during the battle is Ground Theme - Super Mario Bros., both of which represent the Goombas' debut in Super Mario Bros.

When equipped, the Goomba spirit slightly increases the fighter's Foot Attack, a reference to how Goombas are often defeated by being stepped on.

Goombas are also featured in the artwork of the Papercraft Mario primary spirit, as well as the artwork for the River Survival Support spirit. 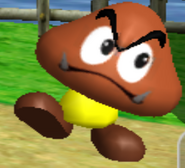 A Goomba defeated by Captain Falcon in Smash Run.