Goldeen (トサキント, Tosakinto in Japanese language versions) is a creature in the Pokémon media franchise. Goldeen appears as a Poké Ball Pokémon in the Super Smash Bros. series.

Along with Snorlax and Mew, Goldeen is one of only three Pokémon that appears as a Poké Ball Pokémon in all five Smash games.

Goldeen is a Water-type, fish-like Pokémon with orange markings on its tail, back, and fins. It has a thin dorsal fin and long pectoral fins. Its dorsal and pectoral fins are quite strong, allowing it to maintain a steady speed of five knots while swimming upstream. Goldeen's caudal fin is admired by many for its beauty as it billows very much like a ballroom dress. Its circular eyes are blue, and it has pink lips. On its forehead is a large horn, which is larger on the male than on the female.

It has a wild temperament, and will use its horn to smash its way to freedom if kept in an aquarium. Humans swimming near it must exercise caution lest Goldeen ram them. Goldeen is a very common sight in any body of fresh water, including ponds, lakes, and rivers. It can be seen swimming upstream in large schools during the breeding season in spring. A strong swimmer, it is capable of swimming non stop up fast streams at a steady speed of five knots per hour. Its tail fin billows like an elegant ballroom dress, giving it the nickname of "The Water Queen". Ironically, even though Goldeen uses Splash in all 4 Smash Bros. games, they cannot learn Splash in the Pokémon RPGs.

Goldeen appears as a Poké Ball Pokémon in Super Smash Bros. It flops around on the stage helplessly until it disappears or has fallen off the stage. It is one of two completely harmless Pokémon in the series, the other being Mew. Goldeen does not have any hitboxes; none of its attacks give damage to any of the characters. Thus, it is established as the "dud" Pokémon of the Smash Bros. series.

Goldeen returns in Super Smash Bros. Melee to reprise its role exactly as something that does not affect gameplay in any way.

Starting here, rumors have flown around the Internet claiming that under certain conditions, Goldeen will activate Horn Drill and instantly KO an opponent. Although this has never been completely proven or disproven, most people accept it as false, due to a lack of evidence beyond a glancing mention in the Melee trophy. Surprisingly, Goldeen does nothing special on stages with water. However, if Goldeen touches water instead of just sinking like most Pokémon it will swim underwater then disappear.

A larger balloon of Goldeen (in actuality, the 3D model of Goldeen used in Pokémon Stadium for Nintendo 64) is one of the many floating and moving "platforms" that comprise the Poké Floats stage.

Goldeen features as a collectible trophy, unlocked as one of the 100+ trophies that can be collected randomly during normal play, such as in the Trophy Lottery, and throughout the various Single-Player game modes. It reads as follows:

A Goldfish Pokémon. In contrast to its elegant appearance, it has a wild temperament, and its attack with its horn is severe. Among the techniques it can master, Horn Drill is especially reliable. It evolves into Seaking, but if it's raised without evolving, it can learn the powerful Bug-type move Megahorn. There are male and female Goldeen--the male's horn is longer.

Goldeen returns in Super Smash Bros. Brawl, and is once again a "dud" Pokémon. The description on the Dojo tells the player to watch out for Murphy's Law (whatever can go wrong, will) when using Poké Balls, showing Goldeen's picture.

A Goldfish Pokemon also known as the Queen of the Sea. In contrast to its elegant appearance, it's wild and has a severe horn attack. Among the techniques it can master, Horn Drill is very reliable. It evolves into Seaking, but if it's raised without evolving, it can learn the powerful Bug-type move Megahorn. There are male and female Goldeen--the male's horn is longer.

Goldeen returns to Super Smash Bros. for Nintendo 3DS/Wii U in the same role as it has had in the past 3 games. Once released from its Poké Ball (or in this game, Master Ball), it will use Splash and just flail around the stage, not affecting any of the players.

This Water-type Pokemon sports a fancy horn on its head. An excellent swimmer, it can literally swim up waterfalls. In the world of Pokemon, this elegant Pokemon has a variety of effective moves in battle. In Smash Bros., however, all it can use is an ineffective Splash attack. 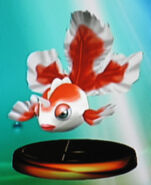 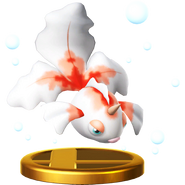 Goldeen's Trophy in Super Smash Bros. for Wii U
Add a photo to this gallery
Retrieved from "https://supersmashbros.fandom.com/wiki/Goldeen?oldid=561606"
Community content is available under CC-BY-SA unless otherwise noted.