Smashpedia
Register
Don't have an account?
Sign In
Advertisement
in: Multiplayer Modes, Modes, Super Smash Bros. 3DS/Wii U,
and 3 more 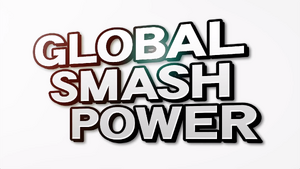 Global Smash Power (GSP) is the new ranking system that has been put into effect for certain solo modes of Super Smash Bros. for Nintendo 3DS/Wii U. The player's rank number is based on the number of people they've outscored instead of the number of people better than them. This means their number will increase as they get better. Players are unable to see how they compare to players with higher ranks.

Global Smash Power is activated once the player connects to the Internet with Super Smash Bros. for Nintendo 3DS/Wii U running at least once, and it is updated each time the player goes online. After connecting, the player's GSP score can be viewed in the following modes:

Although GSP can only be seen in these solo modes, Masahiro Sakurai has stated that when playing in online matches, GSP would also be used to facilitate matching up players according to skill level. However, this mechanic appears to be hidden as no mention of it comes up during online play.

The system returns in Super Smash Bros. Ultimate. It's used in the same way as the previous title. Along with the return of GSP, Elite Smash, a high ranked online battle, was added to the game and can be unlocked after reaching a high enough GSP.