Ultimate: Grows in size. Can aim a punch at opponents, causing an instant Screen KO.

When the move is used, Bowser turns into Giga Bowser from Super Smash Bros. Melee, gaining immense strength. While in this form, he is immune to knockback, but can still receive Hitstun and damage, which may leave Bowser severely weakened and open to KOs after the Final Smash. The transformation lasts about 10 seconds. He gains no new abilities while as Giga Bowser, though his existing abilities become more powerful, and most gain elemental side effects. In Super Smash Bros. Ultimate, he can launch a single punch that deals massive damage and knockback. If it goes over a certain limit, it can cause a one-hit Screen KO; thus, the move can also be called "Giga Bowser Punch".

Giga Bowser has been buffed overall due to being invincible and a Final Smash. Here are the changes:

Bowser becoming larger is a staple of the Mario series. The transformation is different from game to game. In Super Mario Galaxy 2, he used the Grand Star to keep his giant form for almost the whole game. In some games, he doesn't necessarily go giant, but he gets bigger in between boss fights for unknown reasons. In the second Paper Mario, he gets bigger by eating meat similar to Mario's mushrooms. When playable, he becomes larger after eating a mushroom just like everyone else. Though his size is very inconsistent, this is explained in Mario & Luigi: Bowser's Inside Story. It's revealed that when he is in life-threatening danger, his body releases huge amounts of adrenaline that causes him to grow in size.

The design Giga Bowser takes on Smash Bros., however, is an original design exclusive to the Smash Bros. series.

Bowser, transformed into the terrible and brutal form first seen in Super Smash Bros. Melee. While in this form, he's invulnerable--he doesn't get stunned and cannot be budged. His appearance is so fierce, it's as if he doesn't even belong in the Smash Bros. universe. He cannot maintain this form for long, so dealing out damage efficiently is key.

Giga Bowser can be selected like a normal character by hacking. His icon always shows him as normal Bowser. He plays similarly to the Final Smash version but stays transformed for the entire match, even after being KO'd. He is able to be used in modes that disable the ability to use Final Smashes, such as Boss Battles and the Subspace Emissary. Other interesting oddities include:

Other oddities and glitches

Also, if you done a custom stage with blocks and one platform shaped like a box, when Giga Bowser gets in the middle of the box and jumps and does it, he can freeze for 1 minute and the freezing will stop and return to his usual Bowser size. 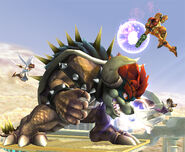 Giga Bowser in Super Smash Bros. for Nintendo 3DS and Wii U