Ghirahim debuts in The Legend of Zelda: Skyward Sword as a mysterious and flamboyant antagonist, who makes his appearance by attempting to kidnap Zelda with a tornado. Throughout the game he causes many problems for Link, Zelda, and Impa, and continually tries to kidnap Zelda. Towards the end of the game it is revealed that Ghirahim works for an even stronger villain, Demise, and is merely the spirit within Demise's Sword, similarly to Link's ally Fi. Link manages to defeat Demise, and Ghirahim disappears, leaving his fate unknown.

Ghirahim appears as an Assist Trophy. He attacks fighters with both his sword and his knives, and traverses the stage primarily by teleporting. He can be flinched if he's attacked. If he is knocked off the stage, he can teleport back; attacks also cannot interrupt Ghirahim's attacks, and can also reflect any projectiles thrown at him.

Link Encounters Ghirahim repeatedly during his adventure. Extremely confident, he encourages Link to use his title, Lord Ghirahim, when they first meet. Is he truly powerful, or does he use eloquent words to distract you and gain an advantage? 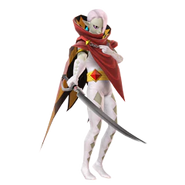