Gerudo Dragon is Ganondorf's Side Special Move in Super Smash Bros. Melee. It is essentially a clone move to Captain Falcon's Raptor Boost, but it is much more powerful, slower, and the uppercut displays dark magic instead of fire.

The Gerudo Dragon allows Ganondorf the ability to counter few projectiles while the attack is propelling him forward, similarly to the Raptor Boost. The attack sends the opponent up into the air, and unlike the Raptor Boost, does not Meteor Smash the opponent when used against someone who is airborne.

In the middle percentages, the attack sets the opponent up for many juggling combos, but due to it being easily punished if used under the wrong circumstances, it is not often the optimal move to use. The attack is moderately laggy if missed; Ganondorf will fall to the ground and sluggishly get up, all the while vulnerable to attack. 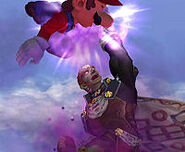 Gerudo Dragon being used against Mario.
Add a photo to this gallery
Retrieved from "https://supersmashbros.fandom.com/wiki/Gerudo_Dragon?oldid=512627"
Community content is available under CC-BY-SA unless otherwise noted.