Genesect is a dual-type Bug/Steel Mythical Pokémon, it first appeared in Pokémon Black and White.

Genesect appears as a Poké Ball Pokémon. It attacks with its signature move Techno Blast, Genesect jumps around the stage while shooting bolts from its cannon that deals low knockback after jumping and landing twice Genesect will fire a powerful laser that can pass through terrain and cannot be blocked with a shield similar to the Daybreak Genesect's Attack does not harm the character that summoned it.

NA: A Bug/Steel-type Pokémon, Genesect was created from a 300-million-year-old fossil and later altered to carry a giant cannon on its back. The type of Drive inserted into the cannon affects the attack type of its Techno Blast. It will follow up this attack with a long-range laser.

PAL: A Bug- and Steel-type Pokémon revived from a 300-million-year-old fossil, then modified to carry a giant cannon on its back. The type of Drive inserted into the cannon affects the attack type of its Techno Blast. After using this attack mid-jump, it attacks its target with a long-range laser than passes through obstacles. 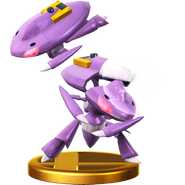 Genesect's Trophy in Super Smash Bros. for Wii U
Add a photo to this gallery
Retrieved from "https://supersmashbros.fandom.com/wiki/Genesect?oldid=589400"
Community content is available under CC-BY-SA unless otherwise noted.