Gardevoir (サーナイト, Sānaito, Sirnight in Japanese language versions) is a creature in the Pokémon media franchise.

Gardevoir first appears in Super Smash Bros. Brawl as a Poké Ball Pokémon (in beta for a strange reason was an Assist Trophy) and, when released, Gardevoir encircles itself in a large barrier ("Reflect"), which reflects all opposing projectiles. As the barrier causes no damage in itself, characters are free to continue play within it, though any enemy projectiles used inside will instantly reflect and damage the user. Gardevoir will slowly walk across the stage from end to end for about fifteen seconds.

Gardevoir's Reflect is the most powerful reflector in the game, doubling a projectile's damage, speed, and knockback. Interestingly, it can even detonate Snake's Down smash.

An Embrace Pokémon. Despite its elegant, feminine appearance, there are both male and female Gardevoir. A Psychic type, it has the ability to predict the future and levitate. It's a brave Pokémon that will risk its own life to protect its Trainer. It uses the ability Synchronize to pass on status problems like poison, paralysis, and burn to its foes.

Gardevoir is a Psychic/Fairy-type Pokemon, bearing an elegant appearance that male and female Gardevoir share. In Smash Bros., it uses Reflect to turn back projectiles and items launched toward it. Helpfully, it won't affect any of the shots from the player who summoned it. Take advantage of this! 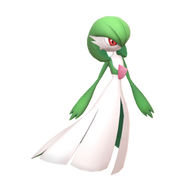 Gardevoir's artwork in Super Smash Bros. Ultimate.
Add a photo to this gallery
Retrieved from "https://supersmashbros.fandom.com/wiki/Gardevoir?oldid=583584"
Community content is available under CC-BY-SA unless otherwise noted.