Garchomp appears in Super Smash Bros. for Nintendo Wii U on the Kalos Pokémon League stage as a background character.

Garchomp looks like a plane's engines mixed with a hammerhead shark. There's something about it that we just find so appealing--we have to get one! Garchomp is capable of folding up its body and spreading its wings, letting it move at Mach speed! Garchompite will Mega Evolve Garchomp into Mega Garchomp, increasing its power even more! 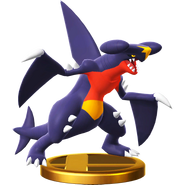 Garchomp's Trophy
Add a photo to this gallery
Retrieved from "https://supersmashbros.fandom.com/wiki/Garchomp?oldid=547434"
Community content is available under CC-BY-SA unless otherwise noted.