This article is about Ganondorf's appearance in Super Smash Bros. Melee. For the character in other contexts, see Ganondorf; for information on the character of whom Ganondorf is a clone, see Captain Falcon.

Ganondorf (ガノンドロフ, Ganondorf) is in his original Gerudo form as he appears in the more recent installments of the series. His design is based on his appearance from the SpaceWorld demo, which is itself based on his appearance in The Legend of Zelda: Ocarina of Time. Instead of using magic or swords like in The Legend of Zelda series, Ganondorf is a clone of Captain Falcon, and as such, he fights in a brawler style similar to Captain Falcon, except in a slower, but more powerful manner.

Currently, Ganondorf ranks 14th on the tier list, located in the E Tier. This is due to his extreme power, good reach, good chain throwing ability, surprising speed in some areas, having what is considered one of the best aerial games, great edge-guarding game, and having a matchup average of +1, while only having disadvantageous matchups against a five characters. However, he has some major flaws, such as his slow ground game, susceptibility to combos and chain throws, being so easily bogged down by fast attacks and projectiles, and being arguably the most vulnerable character to edge-guarding. Another major problem is the fact that three out of five of his disadvantageous matchups are against top tier characters (Falco, Fox, and Sheik). While he has some great strengths, his major flaws, especially the matchup problem against the top tiers, could be what keeps him from being in the higher tiers.

Ganondorf is fought on Final Destination, with the track "Great Bay" playing. 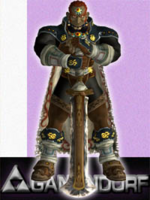 Ganondorf is a character who sacrifices speed for raw power and range. His Up Smash is the strongest in the game if fully charged and if both hits connect. However, hitting the opponent with it is unlikely. His Up Throw and Down Throw are excellent launchers, as well as effective chain throws. His Standard Special Move, Warlock Punch, is one of the strongest attacks in the game: getting hit in any part of the hitbox will almost always result in a KO.

His Down Aerial is the strongest Aerial Attack and Meteor Smash in the game, and it is difficult to recover from or Meteor Cancel, even at low percentages. It can even Star KO opponents that are on the ground under 100% or less. Most of his other attacks are also extremely powerful; every one of his attacks other than his throws have KO power. His aerials are especially powerful, all five being able to reliably KO under 150% (three of which are capable of KOing under 125%) and can combo surprisingly well, giving Ganondorf one of the best aerial games in Melee. He is often considered the most powerful character in the game, with Bowser being the only other character whose power is comparable to that of Ganondorf's.

However, Ganondorf's powerful attacks are counterbalanced with his slowness. Although most of Ganondorf's aerial attacks have long periods of landing lag as well, L-canceling greatly helps this problem. Ganondorf's mobility is also slow, and his wavedash doesn't help because it is rather short. On the upside, Ganondorf can moonwalk, and his great platform dashing game enhances his mobility, as well as his attacking options. He also has among the fastest and farthest rolls in the game due to being a clone of Captain Falcon, who has the fastest and farthest roll dodge. Ganondorf's Down Special Move, Wizard's Foot, is a spike (which means it can't be Meteor Canceled), and is also one of the only two Special Moves which allow the character to regain their midair jump, the other being Falcon Kick.

With a reliable way of regaining his second jump, Ganondorf has a long horizontal recovery. Unfortunately, because of its predictability, slowness, and Ganondorf's large character model, he is extremely vulnerable to edgeguarding and edgehoggers. In return, Ganondorf is a great edgeguarder, with more aerial edgeguarding options than any character in the game. His Up Aerial reverse spike is among one of the best edgeguards in the game, since it has a large radius, covering about 300 degrees around him. It can also easily lead into a Down Aerial for a quick kill.

Many of Ganondorf's attacks have a large hitbox, but he lacks a projectile, and projectile camps are effective against him. Ganondorf's Neutral Attack is extremely fast, and does high damage for how quick it is. It can also be a great move to combo with. Ganondorf is a good candidate for combos and chain grabs due to being large, falling quickly, and being heavy, although this also makes him harder to KO.

Ganondorf has a series of spikes at his disposal, which help make him an even fiercer opponent to face. Most spikes are often Aerial A moves, but in the case of Ganondorf, he has both aerial A and B attacks that can send an opponent to an early KO.

Also referred to as "The Stomp". Both feet are thrusted under Ganondorf, and on contact, the opponent receives an electrical shock animation. If the opponent is on the ground, they are shot upward very fast, which can be DI'ed left or right. If in the air, the attack sends the opponent straight down, once again very fast. The attack can be used multiple times over to combo opponents with low percentage, but requires the ability to SHFFL, and tech chase. However, this is a Meteor Smash, and although it is difficult, the opponent can Meteor Cancel and recover.

Surprisingly Ganondorf's Up Aerial attack can be used to semi-spike an opponent very effectively. The attack has very high priority, so if done correctly, it greatly contributes to Ganondorf players. Ganondorf does a backflip that resembles a flash kick in actual martial arts. One foot is extended during the flip, that creates a hitbox about 200 degrees in rotation around Ganondorf. Ganondorf must be facing away from the opponent, and hit the opponent with the top of his extended foot. There is little knockback, but considerable stun for the amount of damage the attack actually does. As an added bonus, this move is extremely hard to walltech. Something about the physics just makes it next to impossible to tech.

Also used to regain the midair jump while recovering, it will spike an opponent if connected in midair. Ganondorf extends one foot and travels diagonally down, accompanied by a cloud of purple energy. The opponent receives an animation of cloudy purple energy when damaged by this attack. The attack itself puts Ganondorf in an inconvenient position to recover, so it is inferior to the Down Aerial and Up Aerial in most situations. Ganondorf can still double jump and Up B, so it still has its advantages, as the opponent cannot "cancel" the attack.

In addition to the normal trophy about Ganondorf as a character, there are two trophies about him as a fighter, unlocked by completing the Adventure and All-Star modes respectively with Ganondorf on any difficulty.

Ganondorf (Smash Red)
Since he's slow and can't jump very high, Ganondorf relies mainly on his immense physical strength to overwhelm his enemies. His great weight also makes him a difficult foe to send offscreen. Ganondorf's Warlock Punch is slow but absurdly powerful, and when he strikes with his Gerudo Dragon, enemies rise skyward enveloped in dark flames.

Ganondorf (Smash Blue)
Ganondorf's slow speed works against him in single combat, but in melees, his crazy power lets him earn his keep with innumerable KOs. Ganondorf can't strike quickly, but each blow he lands adds up. Ganondorf is at his quickest when he uses the Wizard's Foot, and his Dark Dive blasts foes in a burst of dark energy.

Retrieved from "https://supersmashbros.fandom.com/wiki/Ganondorf_(Super_Smash_Bros._Melee)?oldid=564729"
Community content is available under CC-BY-SA unless otherwise noted.